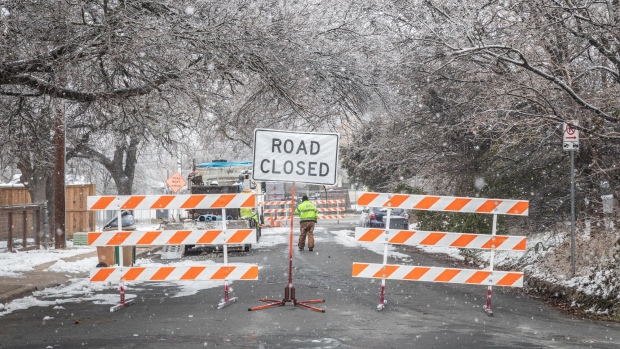 HOUSTON, TEXAS - FEBRUARY 21: The U.S. and Texas flags fly in front of high voltage transmission towers on February 21, 2021 in Houston, Texas. Millions of Texans lost power when winter storm Uri hit the state and knocked out coal, natural gas and nuclear plants that were unprepared for the freezing temperatures brought on by the storm. Wind turbines that provide an estimated 24 percent of energy to the state became inoperable when they froze. (Photo by Justin Sullivan/Getty Images) , Photographer: Justin Sullivan/Getty Images North America

(Bloomberg) -- After months of debate, Texas lawmakers are poised to pass a series of measures in response to February’s deadly blackouts. Yet those bills, critics say, do little to fix the fundamental issues that made the state’s power grid so vulnerable.

While the pending legislation will take steps including forcing electric plants and some pipelines to prepare better for the cold, the bills will do nothing to guarantee the state has enough generating capacity on hand at all times. Nor would they force Texas’s grid to connect to neighboring states so they could provide backup.

The result is that Texas will continue to have the most isolated and least regulated power grid in the U.S., relying largely on market forces to keep the lights on for its 29 million residents. Analysts and others warn that makes the state exposed to another catastrophe.

“They are leaving a potential for another disaster in the future by not putting in a clear set of reliability requirements,” Toby Shea, vice president and senior credit officer at Moody’s Investors Service, said in an interview. “It’s not clear that the market on its own would bother with ensuring that resources will be there.”

Lawmakers in the Republican-controlled legislature defend their approach.

Aside from forcing power plants and other infrastructure to weatherize, the bills they’re sending to Texas Governor Greg Abbott, also a Republican, include measures that will require the grid operator’s board members to reside in the state, increase the number of seats on the state’s utility commission and mandate better coordination among agencies during emergencies. Abbott has already signed a bill to protect consumers from being expose to sky-high wholesale power prices.

There was no need overhaul the entire electricity market, said Kelly Hancock, a Republican state senator who worked on much of the legislation.

“We recognize we have a unique market,” Hancock said during a phone interview. “We have very affordable, low-cost energy. We just have to make sure we address the issues that occurred when every single county was freezing. I think we can do that in our current market structure.”

The freeze cast millions of Texans into darkness for the better part of a week, shutting off water supplies and household furnaces. Texas authorities pegged the death toll at 151, but an analysis of excess-fatality data by Buzzfeed concluded it was more than four times higher.

The Texas legislative session ends on Monday, and the state’s Senate and House of Representatives meets every other year. That means Texans will be exposed to two winter seasons before another chance arises to enact changes.

In much of the U.S., grid operators ensure they have enough backup capacity by paying a certain number of power plants to sit idle, standing by to provide electricity in case it’s ever needed. That lowers the odds of blackouts. But it drives up costs for consumers.

Texas has no such system. The idea there is that the market provides all the incentive needed for power plants to be at ready so they can capitalize on surging prices if supply runs tight. That typically happens in summer.

The deep freeze, however, caught generators by surprise, hitting at a time when many were down for maintenance. As cold set in, people cranked up their heat. Electricity demand skyrocketed, and there weren’t enough generators to meet the need. Many of the power plants that were online froze up. So did natural gas wells and pipelines, leaving generators short of fuel.

Texas has long been the only state in the continental U.S. with a power grid that’s almost entirely separated from its neighbors. Adding connections to Louisiana, Oklahoma or other adjacent states would allow Texas to bring in extra power when needed -- but it would also bring increased federal oversight. Lawmakers never seriously debated the issue.

In the end, none of the proposed legislation does anything to prevent another energy crisis like the one that struck Texas in February, said Ed Hirs, an energy fellow at the University of Houston.

“These are short-term band-aids that don’t address the bigger problem of the Texas electricity market,” he said.

Even the bills requiring power plants, pipelines and gas wells to weatherize didn’t go far enough, critics said. They contend the proposed fines ($5,000 a day for most violations) aren’t high enough to enforce changes and say there aren’t mandated deadlines for energy companies to comply.

“This bill will lead some to invest in measures to protect against extreme temperatures,” said Luke Metzger, executive director of Environment Texas. “But loopholes and weak fines will likely lead many gas wells and power plants to do nothing.”