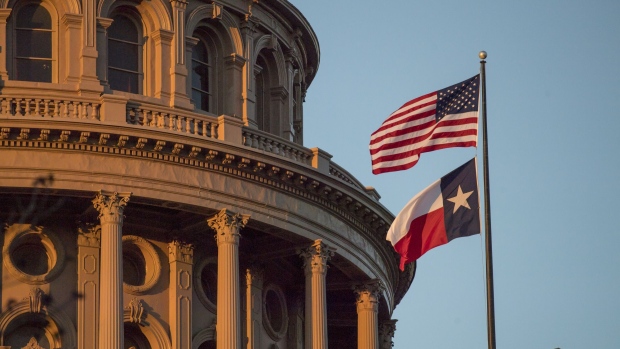 An American flag flies with the Texas state flag outside the Texas State Capitol building in Austin, Texas, U.S., on Tuesday, March 14, 2017. Austin has spent the last 10 months engaged in a big experiment in urban transportation. Several hundreds of thousands of people will descend upon Austin for the annual South by Southwest festival, a nine-day event that could be described as a tech conference, a music and film festival. Photographer: David Paul Morris/Bloomberg , Bloomberg

(Bloomberg) -- Advocates for and against Texas’ strict abortion law painted starkly different portraits of the power of federal judges to protect constitutional rights as each side made its case in advance of next week’s U.S. Supreme Court showdown.

Texas and its allies on Wednesday urged the court to reject challenges to the law, which has largely shut down legal abortion in the nation’s second-largest state. The measure authorizes enforcement only by private lawsuits, and state officials said that novel provision means federal judges lack any means of throwing out the law.

“The Constitution does not guarantee pre-enforcement review of state (or federal) laws in federal court,” Texas Attorney General Ken Paxton argued. He said those opposed to the law could make their constitutional arguments after being sued in state court for violating the measure.

“If Texas is right, no decision of this court is safe,” acting U.S. Solicitor General Brian Fletcher argued. “States need not comply with, or even challenge, precedents with which they disagree. They may simply outlaw the exercise of whatever constitutional rights they disfavor; disclaim enforcement by state officials; and delegate the state’s enforcement authority to members of the general public.”

The Nov. 1 argument will come two months after the conservative-dominated court let the law take effect on a 5-4 vote and become easily the country’s strictest abortion law. The law bans almost all abortions after the sixth week of pregnancy -- months earlier than the Supreme Court has previously indicated is permissible.

The argument will center on the law’s enforcement mechanism and the Justice Department’s ability to sue rather than the underlying abortion right.

The court will hear arguments Dec. 1 on a separate appeal that takes direct aim at Roe v. Wade, the landmark 1973 ruling that legalized the procedure nationwide. That case centers on a Mississippi law that would ban abortion after the 15th week of pregnancy.