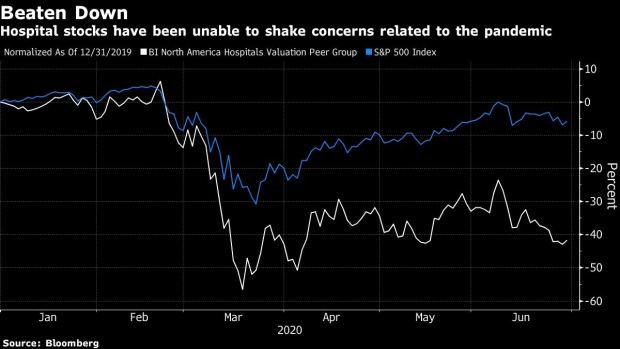 (Bloomberg) -- The suspension of elective surgeries in parts of Texas rekindles risks for hospitals and medical devicemakers that were only just beginning to recover from a monthslong shutdown across the country.

The halting of procedures is not only a negative for hospitals in Texas; it also represents a reaction that could be mimicked in other states that are struggling to control the spread of coronavirus, according to analysts at Bernstein.

“We believe the political equation will make other states following this lead more likely,” Bernstein analysts led by Lance Wilkes and Lee Hambright wrote in a June 26 report. “Halting of elective procedures instituted by the Republican Governor of Texas would certainly make it easier for other Republican Governors to institute lockdowns of procedures.”

Texas Governor Greg Abbott’s executive order requires that the state’s four most populous counties postpone non-urgent elective surgeries. HCA Healthcare Inc. and Tenet Healthcare Corp. are most at risk as Texas accounts for more than a fifth of their total hospital beds, according to data compiled by Jefferies analyst Brian Tanquilut.

The spread of infection is a “tangible headwind” for the two hospital stocks and could interrupt their recent rebound, Tanquilut wrote in a June 26 note.

Tanquilut is keeping an eye on a potential shutdown in other states with a growing number of Covid-19 cases. Arizona, California, Florida and Texas account for 70% of Tenet’s total beds, more than half of HCA’s and roughly a third of Community Health Systems Inc.’s capacity.

As the initial shutdowns whipsawed the broader market through the end of March, an index of U.S. hospitals suffered its worst quarterly slide since the 2008 Financial Crisis. While many on Wall Street have stressed that hospitals are more equipped to weather a second wave of cases, the key is for the industry to get back to some form of normal by year end.

“It’s a question of how long does this last,” Tanquilut said. “If this carries past the third quarter where we are at these depressed levels I think that will be a concern.”

Analysts say Governor Abbott’s intention in Texas is not to shutter surgeries on a large scale, but to ensure that hospitals have the capacity to treat patients with the virus.

“The order appears to leave a fair amount of discretion to local medical and hospital operators,” Credit Suisse analyst A.J. Rice wrote. “However, the order may also impact patient willingness to re-engage for healthcare in the impacted areas.”

Concern that patients may defer elective surgeries until cases subside or a vaccine is approved has been a hot topic among investors since the pandemic began. In addition to hospitals, shares of medical device makers such as Boston Scientific Corp. and Zimmer Biomet Holdings Inc. had been under pressure amid a dropoff in new heart valve surgeries or knee and hip replacements. The two companies, which have lost more than one-fifth of their market value this year, have erased a recent rebound and now fallen 3.7% and 6.2% in the past five days.

“One of the key variables that remains difficult to address is if the cases will be concentrated in one area or spread out, which can drive the need for targeted lockdowns to compensate for overwhelmed local hospitals,” Morgan Stanley analyst Matthew Harrison wrote. In a June 29 report, Harrison said if Texas and Florida are unable to break their exponential growth within the next 10 days, that would make the outbreak “uncontrollable without more aggressive measures.”

Houston-area intensive-care unit wards were 95% full as of Sunday, although local hospitals could make hundreds of additional beds available, if needed. In Miami-Dade County, Florida, the number of Covid-19 patients in ICU beds, and those on ventilators, were the highest since early May. Los Angeles County had its highest daily totals of new cases and people who are hospitalized due to the virus.

Raymond James analyst Lawrence Keusch said that while the spike in Covid-19 hot spots is concerning, and that the move by Texas is a negative for companies with exposure to elective surgeries, the “geographic whack-a-mole” is unlikely to have a broader impact.

“The thinking is that we should exit the year in a much, much better situation,” Tanquilut said.