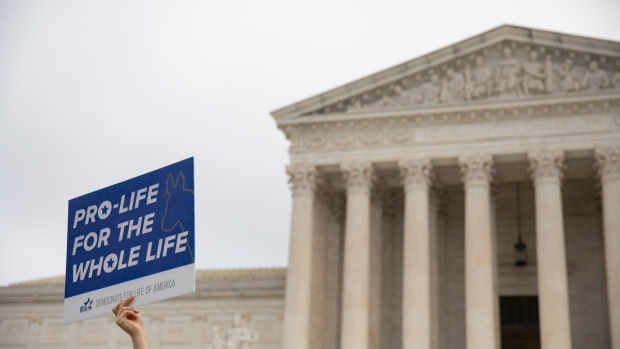 A demonstrator holds a pro-life sign in front of of the U.S. Supreme Court in Washington, D.C., U.S., on Tuesday, Oct. 12, 2021. Louisville's EMW Women's Surgical Center is part of the court's term that could gut the constitutional right to abortion and allow sweeping new restrictions in much of the country. Photographer: Emily Elconin/Bloomberg , Bloomberg

(Bloomberg) -- Texas officials urged the U.S. Supreme Court to leave in force the nation’s strictest abortion law, saying the justices should reject calls by the Biden administration and clinics to intervene in the high-stakes clash.

The Justice Department on Monday called on the justices to halt the law while litigation goes forward. The department said Texas is unconstitutionally trying to avoid judicial review -- and “nullify” the Supreme Court’s abortion-rights precedents -- with a novel mechanism that puts enforcement in the hands of private parties.

A federal appeals court last week let the law go back into effect after a trial judge ruled the measure unconstitutional and blocked it for two days.

The Justice Department also suggested the Supreme Court could hear arguments and issue a definitive ruling, rather than just an interim order. That would require the high court to take the unusual step of bypassing the appeals court, which hasn’t yet made a final ruling. Abortion providers have filed a similar request -- known as a petition for certiorari before judgment -- in a separate case.

The Supreme Court could act in a matter of days on the requests, though the justices aren’t bound by any deadline.

The high court let the law take effect on Sept. 1, largely shutting down the procedure in the second-most populous U.S. state. The majority said in that 5-4 decision that the clinics and doctors  “raised serious questions regarding the constitutionality” of the measure but hadn’t overcome procedural obstacles stemming from the unusual enforcement mechanism.

The court is already set to hear arguments in December on a Mississippi appeal that aims to give states far more power to restrict abortion and even asks the court to overturn Roe v. Wade, the landmark 1973 ruling that legalized the procedure nationwide.

The Texas law, known as Senate Bill 8, bars abortion after fetal cardiac activity can be detected and puts infringing clinics at risk of being shut down. The measure lets private parties sue a clinic or anyone who helps a woman get an abortion -- and collect a minimum of $10,000 in damages per procedure -- but doesn’t authorize government officials to sue alleged violators.

The provision left it unclear how, if at all, a court could stop the law. Normally, judges faced with an unconstitutional law can issue an order directed at the government officials who have enforcement powers.

In its Sept. 1 decision, the Supreme Court said that “federal courts enjoy the power to enjoin individuals tasked with enforcing laws, not the laws themselves.”

The Justice Department says it doesn’t face the same obstacles the providers did, in part because the federal government can sue Texas directly without infringing the state’s sovereign immunity. The providers tried to sidestep sovereign immunity by suing the judges and clerks who would handle any private enforcement suits.

The department says it has the right to vindicate the supremacy of federal law, including the Constitution.