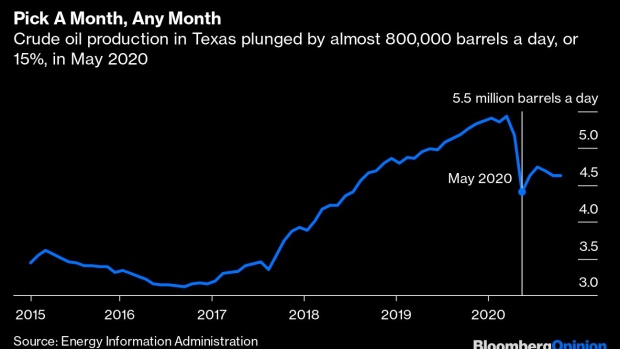 GARDEN CITY, TX - FEBRUARY 05: Flared natural gas is burned off at Apache Corporations operations at the Deadwood natural gas plant in the Permian Basin on February 5, 2015 in Garden City, Texas. Apache sends an estimated 50-52 million cubic feet of natural gas to this plant per day. As crude oil prices have fallen nearly 60 percent globally, American communities dependent on oil revenue prepare for hard times. Texas, which benefited from hydraulic fracturing and the shale drilling revolution, tripled its production of oil in the last five years. The Texan economy saw hundreds of billions of dollars come into the state before the global plunge in prices. Across the state drilling budgets are being slashed and companies are notifying workers of upcoming layoffs. According to federal labor statistics, around 300,000 people work in the Texas oil and gas industry, 50 percent more than four years ago. (Photo by Spencer Platt/Getty Images) , Photographer: Spencer Platt/Getty Images North America

(Bloomberg Opinion) -- Wayne Christian, one of three Texas Railroad Commissioners, seems to have just about had it with the French. And the Russians. And the Iranians. The “sensationalist, fake news media” and “environmental extremists” are off his Christmas list, too. He also has precious little time for the whole Environmental, Social and Governance, or ESG, investing thing — or, as he puts it, “the new ‘woke’ way to save money.”

His latest missive — “An Assault from All Fronts on Energy Independence” — wasn’t published in all-caps; but it reads like the original draft was hammered out with the caps-lock on.

A little backstory: Texas has a problem with flaring and venting of natural gas, whereby unwanted gas (mainly from oil wells) is burned off or just released into the air. As shale oil production boomed in the Permian basin, so did flaring and venting; in recent years, more Texan gas has gone up into the heavens than been used in the state’s homes.

Since natural gas releases carbon when burned and methane is a potent greenhouse gas on its own, these both exacerbate climate change. Last February, the commission felt compelled to issue a study defending its practice of handing out flaring permits with abandon. In November, it gave some ground and voted to update the application process; from April, producers will have to file more documentation justifying their need to flare gas.

This fell short of what environmentalists, several large fund managers and even some oil majors wanted. The French are also non-plussed, apparently. Engie SA, a French utility, broke off negotiations for a U.S. liquefied natural gas contract, reportedly under pressure from a French government — which owns 24% of the company — concerned about fracking and methane emissions.

This was, it seems, the final straw:

France is going to have to get their natural gas from somewhere, and wherever it is it’s going to cause more harm to the environment and geopolitics. France may get its natural gas from Iran, which has dangerous nuclear ambitions and has threatened to blow up Israel several times. Or they could turn to Russia who has dangerous ambitions and invaded Crimea just a couple years ago. Or they could look to the Middle East, a region not exactly well known for its respect of Western legal traditions.

The phrase “a lot to unpack there” doesn’t do this paragraph quite the justice it deserves. The main point, though, is that Christian is dissing the French for not taking U.S. gas because that means getting it from a pack of deplorables instead.

While the language is a little more free-wheeling, Christian’s release is a natural successor to last February’s report. That was an exercise in whataboutism, spinning Texas’ gas flaring as not that bad if you focused on gas-per-barrel rather than absolute amounts and then compared that metric to tough benchmarks like … Iraq and Iran. Using flaring intensity elides the fact that climate change results from the absolute quantity of greenhouse gases entering the atmosphere.

Christian restates the intensity argument in a different way, writing “less than a half percent of the gas produced in Texas was flared or vented,” according to an announcement made last August. That announcement specified that figure applied to the month of May 2020 — which was an interesting month.

While Christian overstates his case by choosing the period when the Saudi-Russian price war and Covid-19 sent the oil business into freefall, flaring is less intense than it was. Artem Abramov, who heads shale research at Rystad Energy, says the collapse in activity accelerated an existing decline in flaring. He estimates 1.6% of Permian gas was flared in the fourth quarter of 2020 — triple Christian’s state-wide figure for May but way down from the 4-5% level seen in late 2018 and much of 2019.

Yet there is no room for complacency. It remains to be seen how much flaring and venting comes back as fracking recovers; drilling and completion activity in the Permian and Eagle Ford basins in November was still 65-70% below the level of a year before.

n a striking presentation given last summer, Kayrros SAS, a French data analytics firm that tracks venting and flaring using satellite imagery, compared methane emissions for different gas producing regions around the world (view the webinar here). It found the methane intensity — emissions per quantity of fuel — for liquefied natural gas from the Permian basin to be far higher than for Russia. Meanwhile, in an analysis published last month, the Boston Consulting Group concluded U.S. LNG has the highest greenhouse-gas intensity of any major exporter, well above major competitors Russia and Qatar. That doesn’t just relate to flaring and venting but also, for example, leaks from valves and other equipment.

Christian is right that Russian gas comes with strings attached (see this). On the other hand, the very name of President Donald Trump’s “energy dominance” policy isn’t exactly subtle about its intent. Speaking of an “era of great power rivalry,” Secretary of State Michael Pompeo boasted in 2019 that the U.S. isn’t just exporting energy, but “our commercial value system.” Freedom molecules don’t come for free, as it were. I don’t know if you know many French people, but that sort of thing tends to rub them the wrong way (a bit like Texans in that regard). And it need hardly be mentioned that Trump’s diplomatic relations with Europe these past few years have lacked a certain je ne sais quoi.

The point is, Texas must earn its place in a competitive global market, not simply demand everyone get with the program. On this front, Christian’s dismissal of climate change concerns doesn’t bode well. He centers his criticism on the Paris Agreement, repeating a tired (and debunked) talking point from the Trump Administration about its minimal impact on global temperature. Christian also touts U.S. gas as “affordable.” But such apparent affordability is partly because its emissions go unpriced — and at least some buyers now factor that in.

While Christian may think climate action like the Paris Agreement is misguided, a large and growing proportion of the rest of the U.S. and the world do not share that opinion. That includes banks wary of lending to projects with high emissions and authorities like the EU proposing carbon border-adjustment  mechanisms (a tariff on foreign pollution, essentially).

Yes, shale gas helped to cut U.S. carbon emissions by displacing coal-fired power (although methane leaks associated with fracking undo at least some of the benefit). But that doesn’t mean gas is assured of its place from here as emissions standards tighten and competing renewable energy technologies are deployed at different rates around the world. Even the International Energy Agency, which long championed gas as a so-called “bridge fuel” for energy transition, now projects demand to decline in the late 2020s under its “sustainable development” scenario(1).

BCG estimates that, even under a more bullish outlook, much of the incremental LNG export capacity needed by 2030 could be met by lower-cost projects in Qatar, Russia and Mozambique, leaving little room for the long list of proposed U.S. export terminals. That freedom gas will have to work hard to find buyers.

The swipe at ESG investing is similarly like kicking back the tide. Capital markets are, as so often, anticipating the technological, economic and political shifts provoked by climate change. Does ESG suffer from bubbly hype and attract hucksters? Of course it does. But you could say exactly the same thing about the shale boom of the past decade that Christian feels compelled to defend. He cites a May 2019 report from right-wing think tank the Pacific Research Institute claiming the S&P 500 outperformed a basket of ESG investments by 44% over a decade. At least the ESG basket’s returns were positive. If radical environmentalists are “coming for your retirement account”, as Christian puts it, maybe you best hope they got there before the shale guys did:

Yes, the collapse in oil prices touched off the frackers’ fall. That was just the spark, though; the bigger problem was a culture of excessive spending in the pursuit of growth rather than profits (see this, this, this and this). Never mind the “E” and the “S”, the “G” was sorely lacking. In this, the industry was enabled by enthusiastic investors and lenders (until recently). But the Texas Railroad Commission’s willingness to hand out flaring permits by the thousands every year helped, too, effectively offloading the cost of dealing with greenhouse gas emissions to the general public.

Superficially, that helps the industry the commission is tasked with regulating. But the reality is that it encouraged the impulses that destroyed the frackers’ balance sheets and their relationship with investors. Above all, if U.S. gas is to be truly competitive in a world where supplies are plentiful but tolerance for emissions is dwindling, the industry must ditch drill-baby-drill. When buyers (and investors) have options, they make demands. Characterizing that as an assault may be good for venting, but not much else.