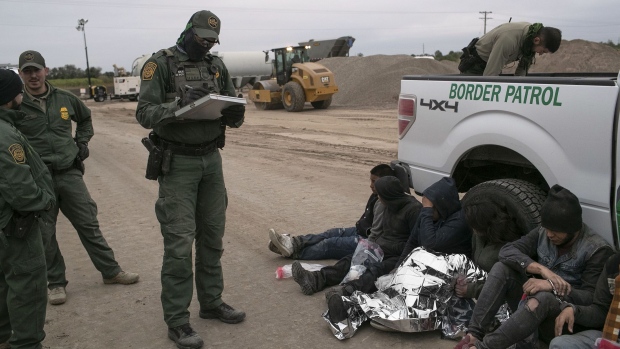 MISSION, TEXAS - DECEMBER 11: U.S. Border Patrol agents detain undocumented immigrants who they caught near the construction site of a privately-built border wall on December 11, 2019 near Mission, Texas. The hardline immigration group We Build The Wall is funding construction of the wall on private land along the Rio Grande, which forms the border with Mexico. The group, led by former Trump strategist Stephen Bannon claims to have raised tens of millions of dollars in a GoFundMe drive to build sections of wall along stretches of the southwest border with Mexico. (Photo by John Moore/Getty Images) Photographer: John Moore/Getty Images North America , Photographer: John Moore/Getty Images North America

(Bloomberg) -- The U.S. government’s plan to pause deportations of undocumented immigrants for 100 days starting Friday was temporarily blocked by a judge in a preliminary victory for Texas, which sued President Joe Biden’s administration just two days after it started.

Tuesday’s ruling by U.S. District Judge Drew Tipton blocks the Department of Homeland Security from immediately halting deportations. The suit was the first by a Republican-led state challenging policies by the new administration.

The judge, a Donald Trump appointee, ruled that the suit “establishes a substantial risk of imminent and irreparable harm to Texas” from the planned freeze.

“Nationwide injunctions of executive action are a topic of fierce and ongoing debate in both the courts and the legal academy,” Tipton said in his order. Even so, Tipton ruled the Biden administration “must be enjoined from executing the January 20 Memorandum’s 100-day pause on the removal of aliens in every place Defendants would have jurisdiction to implement it.”

The Department of Homeland Security didn’t immediately respond to a request for comment.

(Updates with detail from the ruling)