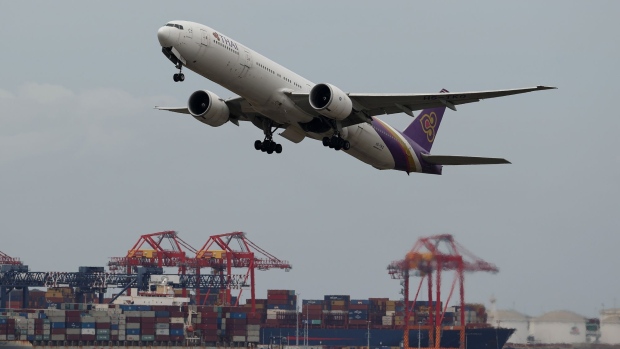 An aircraft operated by Thai Airways International Pcl takes off from from Sydney Airport in Sydney, Australia, on Monday, Nov. 1, 2021. Vaccinated overseas travelers entering Australia's biggest states, New South Wales and Victoria, no longer need to quarantine on arrival, while millions of Australians living on the country’s east coast can finally leave their home soil without a permit. Photographer: Brendon Thorne/Bloomberg , Bloomberg

(Bloomberg) -- Thai Airways International Pcl will receive key financial support from the government for its 80 billion baht ($2.3 billion) capital raising and debt-to-equity swap plan aimed at helping the state-controlled carrier come out of its pandemic-induced bankruptcy.

State-owned banks will lead in funding new loans, converting debt and injecting equity capital into Thai Air as part of a revised revamp plan the airline gave the court for approval last month, Finance Minister Arkhom Termpittayapaisith said in an interview with Bloomberg News on Monday. The ministry and other agencies will continue to maintain a combined stake of at least 40%, but the proportion won’t exceed 50% to induce the carrier to stay competitive, he added.

The carrier expects to emerge from its court-monitored debt-restructuring plan by 2024. It filed for bankruptcy protection in 2020, having posted losses every year from 2013. But a rebound in global air travel has boosted its cash flow and reduced the amount of loans that was specified by in the court’s original plan.

“The situation in Thai Airways is much better,” and that has boosted creditors’ and shareholders’ confidence in its survival and future, said Arkhom. State-owned banks will be able to offer the entire 13 billion baht in new loans the airline is now seeking -- which is about half the 25 billion baht requested earlier. The revised amount can be fully funded by state banks, he said.

The reopening of Thailand’s borders and those of other countries will also support cash flow. The airline’s most-profitable flights are those with connections in Europe.

The improving finances and capital-raising plan will accelerate the resumption of trading in the airline’s shares, which were suspended in May, he said. The previous timeline for trading to begin again was in 2025.