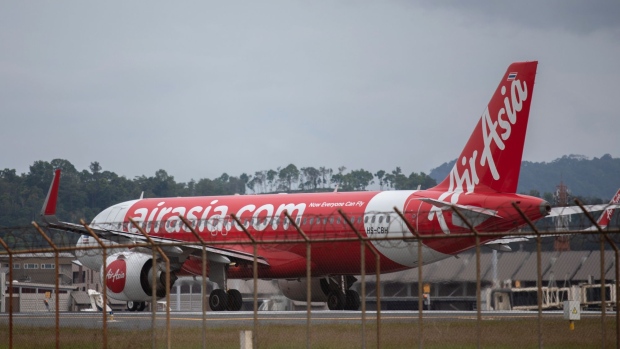 (Bloomberg) -- Asia Aviation Pcl, the operator of Thailand’s biggest budget carrier Thai AirAsia Co., plans to raise as much as 17.9 billion baht ($535 million) from new loans, share sales and convertible-debt offerings as it attempts to restock coffers depleted by the worst crisis in aviation history.

A revised financial restructuring plan for the company has been put forward and Asia Aviation is consulting with new investors, shareholders and creditors, Asia Aviation said in an exchange filing late Tuesday.

The holding company joins a plethora of airlines globally trying to repair their balance sheets after Covid-19 all but put a stop to international air travel in early 2020. While climbing vaccination rates are seeing travel spring back in some parts of the world, in Asia it’s nowhere near pre-pandemic levels. Thai Airways International Pcl and Nok Airlines Pcl are also pursuing financial restructurings.

Asia Aviation Chief Executive Officer Santisuk Klongchaiya said the fresh funds should allow the airline to increase flights amid an expected recovery in tourism and travel.

Thailand’s capital Bangkok has administered at least two doses of Covid vaccine to 71% of its adult population, paving the way for the city to welcome back inoculated visitors without mandatory quarantine from Nov. 1., officials said Wednesday.

Asia Aviation plans to raise a total of 8.8 billion baht from a private share sale to Malaysia’s AirAsia Group Bhd. and an individual investor. That will comprise around 4.5 billion of new shares to AirAsia to raise 7.8 billion baht and another sale to a group of investors led by Pitharn Ongkosit, the chief executive officer of KCE Electronics Pcl, to raise 1 billion baht.

Asia Aviation, which owns a 55% stake in Thai AirAsia, will use most of the proceeds to acquire the shares of Thai AirAsia it doesn’t already control. Other funds will be used to repay debt.

The company’s shares slipped 3.3% in Bangkok on Wednesday, trimming their advance this year to 23%.