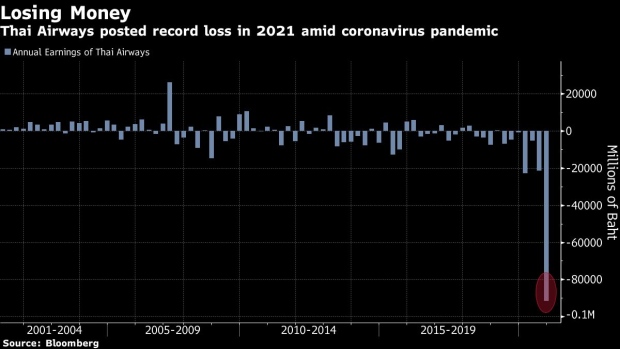 A passenger aircraft operated by Thai Airways International Pcl takes off from Munich airport in Munich, Germany, on Tuesday, Jan. 29, 2019. Deutsche Lufthansa AG has decided to speed up growth at Munich and develop it into a hub with a focus on Asia. Photographer: Michaela Handrek-Rehle/Bloomberg , Bloomberg

Creditors will meet via video conference to vote on its debt restructuring plan. The airline, which has total liabilities of at least $11 billion, in March proposed a three-year freeze on loan repayments in one of the nation’s most high-profile restructurings.

Thai Airways is seeking a deferment of bond repayments for six years and a waiver of unpaid interest on loans as part of the plan, involving about 170 billion baht ($5.5 billion) of debt. It’s also looking to raise 50 billion baht in new capital, plans to slash its workforce in half and sell property to help return to profitability.

Creditors holding at least 50% of the airline’s debt must approve the plan for it to pass, according to Thailand’s bankruptcy law.

The Southeast Asian country is facing renewed woes more than a year into the pandemic as a new wave of infections brings more turmoil to its crucial travel sector. Thai Airways, which saw a record loss of 141 billion baht last year, joins other global peers in trying to get debt relief as mass flight suspensions cause carriers to seek financial help from governments and investors.

A senior lawyer at Kudun & Partners Ltd., which is representing the creditors, said in March that their initial response to the proposed restructuring was favorable. Thailand’s finance ministry, the Bangkok-based airline’s largest shareholder, indicated its backing for the debt plan that same month.