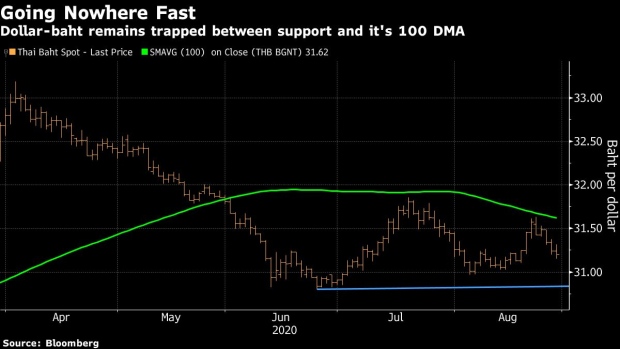 The portrait of Thai King Maha Vajiralongkorn is displayed on a 1,000 baht note in an arranged photograph in Bangkok, Thailand, on Wednesday, Sept. 12, 2018. The baht has been a stand-out currency amid the recent rout in emerging markets. It's appreciated 1.5 percent against the dollar so far this quarter, the best performer among major Asian currencies and the only gainer among them. Photographer: Brent Lewin/Bloomberg , Bloomberg

(Bloomberg) -- Thailand’s baht could be at a turning point. It’s the second-worst performing currency in Asia this year, but expectations that the economy may bottom out over the next few months is spurring some bullish bets.

The baht lost ground as Thailand’s tourism-dependent economy was hit hard by travel restrictions to control the coronavirus spread. It’s down almost 4% against the dollar this year, just behind the Indonesian rupiah. Though, it’s showing signs of revival with gains of 0.5% in August.

Some analysts are turning bullish after Thailand’s Finance Minister Predee Daochai said last week the economy will likely bottom out in the second half of the year and rebound in 2021. Current account data this week could also be supportive as it’s forecast to post a surplus of $1 billion in July from a deficit of $247 million in the previous month.

“Over a thee-month horizon, we think it will outperform its Asian peers,” says Divya Devesh, head of Asean & South-Asia FX research at Standard Chartered Bank SG Ltd in Singapore. He sees the nation’s status as a major gold exporter and positive real yields attracting inflows.

The baht’s misfortune is a dramatic swing from last year, when it was the region’s best performer with an 8.6% gain. While the economic recovery prospects bode well for the currency, the Bank of Thailand has indicated in its latest meeting minutes that that it will act if needed to prevent a rapid appreciation.

Technically, the baht remains in consolidation mode as the dueling forces battle it out. The currency pair’s 100 day moving average continues to cap any rally against the dollar, while support under 31.00 is limiting any downside movement.

Below are the key Asian economic data and events due this week: