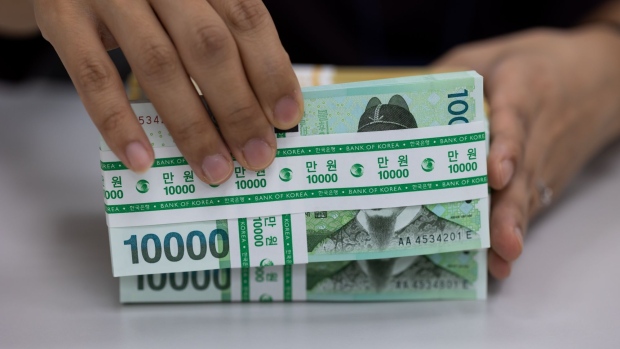 Bundles of 10,000 won banknotes arranged at the Shinhan Bank headquarters, a unit of Shinhan Financial Group Co., in Seoul, South Korea, Sept. 14, 2022. Policy makers in Asia pushed back against a surging dollar, seeking to stem losses as their currencies teetered on the brink of key levels that may trigger more selling. Photographer: SeongJoon Cho/Bloomberg , Bloomberg

(Bloomberg) -- Thailand’s baht and the South Korean won jumped from the Asian open after the dollar weakened on Wednesday when the Bank of England’s bond purchases boosted risk sentiment.

Both of the currencies had slumped to multi-year lows on Wednesday as emerging-market assets were roiled by concern aggressive tightening by the Federal Reserve will lead to a global recession.

“The BOE’s intervention is being priced in, which comes on top of South Korean measures to buy bonds yesterday,” said Kim Yumi, a market strategist at Kiwoom Securities in Seoul. “The effect of intervention could last for about a month as a Federal Reserve meeting isn’t scheduled until early November.”