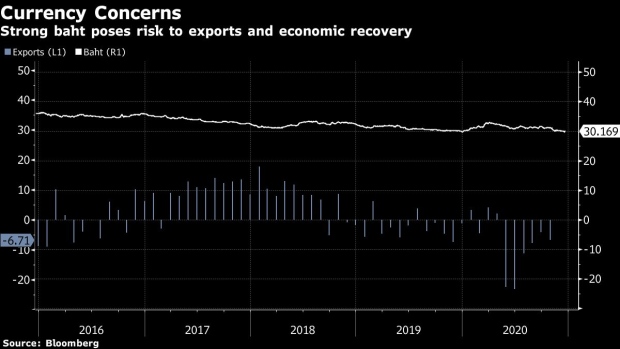 A view of the Bangkok skyline earlier in October. Photographer: Andre Malerba/Bloomberg , Bloomberg

(Bloomberg) -- The Bank of Thailand kept its benchmark interest rate unchanged for a fifth straight meeting to preserve its limited policy space, while reiterating concerns about a currency rally and lowering its economic growth forecast for next year.

The central bank held the policy rate Wednesday at 0.5% in a unanimous decision, after cutting by a total of 75 basis points earlier this year. Sixteen of 17 economists in a Bloomberg survey predicted the hold, with one expecting a 25-basis point cut.

The Covid-19 pandemic has devastated two of Thailand’s main growth drivers, tourism and trade. The government has responded with a series of stimulus measures, recently approving an additional $1.4 billion expenditure for the first quarter of 2021. A fresh virus outbreak over the weekend has added a new risk to the fragile recovery.

Strength in the baht currency has emerged as a key concern as the government seeks to support exports. The baht has rallied more than 9% from this year’s low in April.

Seeking to stem baht gains, the central bank has issued a variety of measures to boost capital outflows, and its dollar purchases pushed foreign reserves to a record $255.8 billion in the week ended Dec. 11. Thailand recently was added to a U.S. Treasury Department monitoring list over its foreign-exchange intervention.

The central bank on Wednesday revised up its growth forecast for 2020, predicting a 6.6% contraction compared with a previous projection of a 7.8% decline. It cut next year’s forecast to 3.2% growth, from 3.6% previously.