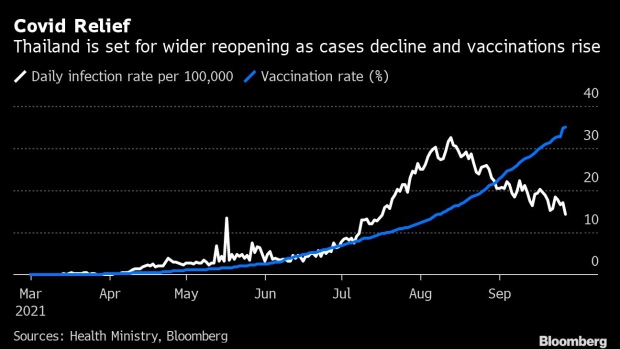 (Bloomberg) -- The Bank of Thailand will likely keep its benchmark interest rate unchanged at a record low to gauge whether recent government moves to ease virus restrictions and open more cities are aiding the economy.

Nineteen out of 22 economists surveyed by Bloomberg expect the central bank to keep the policy rate at 0.5% on Wednesday for an 11th straight meeting, while the rest predict a 25-basis point cut. The Monetary Policy Committee may also make revisions to last month’s forecasts for economic growth of 0.7% this year and 3.7% in 2022.

Prime Minister Prayuth Chan-Ocha announced a series of easing moves Monday as part of the government’s “living with Covid” strategy to jumpstart the economy. The steps come as the country ramps up inoculations, with as many as 1 million doses a day administered in the past week.

“Things are looking a bit better with rising vaccinations and lower new infections, though uncertainty remains high looking forward,” said Nattaporn Triratanasirikul, an economist at Kasikornbank Pcl’s research unit. “The central bank will likely stand pat this year and preserve its limited policy space for an unexpected downturn. The Federal Reserve’s tightening signs will also raise the cost for Thailand if we decide to move against the trend and cut rates further.”

Here’s what to look for in Wednesday’s decision:

Despite positive trends such as the easing of restrictions and increased vaccinations, a number of economists believe the Thai economy remains in the doldrums with local demand weak. Exports and manufacturing, which were key economic supporters earlier in the pandemic, have been affected in August and September by virus spread in factories, quasi-lockdown measures and semiconductor shortages.

Thailand’s main economic planning body cut its gross domestic product forecast last month to 0.7%-1.2% growth, after the Finance Ministry trimmed its prediction to 1.3% in July. On Tuesday, the World Bank cut its forecast for Thai GDP growth to 1% this year, the lowest in Southeast Asia aside from post-coup Myanmar.

The central bank will likely maintain its dovish stance, with at least one dissenting vote expected after two of the six policy makers in attendance last month voted for a 25-basis point rate cut, the committee’s first split decision since May 2020.

“It’s only a matter of time before the Bank of Thailand boosts support for the economy, in our view. The only question is how. Some board members have shifted in favor of a rate cut. But the case for quantitative easing is looking stronger -- it is a more targeted tool that could be focused on longer-dated yields, which have started to rise while the front-end of the curve remains well-anchored.”

Minutes of the August meeting show the Monetary Policy Committee believes government fiscal measures would be more effective in jump-starting the economy than a further cut in the policy rate.

Governor Sethaput Suthiwartnarueput said Monday the central bank stands ready to issue new measures or adjust current measures to help those affected by the pandemic. Earlier this month the central bank revised the criteria for its low-interest loans, as well as incentives for commercial banks to support debt restructuring.

The government last week moved to lift the public-debt ceiling to accommodate higher borrowing and spending to support the recovery. Stimulus measures to boost local consumption and domestic tourism are expected to resume from October, assuming the outbreak eases.

The baht has weakened more than 11% against the dollar so far this year, the worst performer among major Asian currencies tracked by Bloomberg. The central bank and government have been tolerant of baht movement this year, as the weaker currency helps exports. Shipments rose 8.9% in August and 15.3% in the first eighth months of the year.

According to last month’s MPC minutes, the baht exhibited more volatile movement and could depreciate more than its regional peers because of domestic factors. The committee said it would closely monitor financial-market developments to maintain baht stability and ensure that the exchange rate doesn’t hinder businesses.