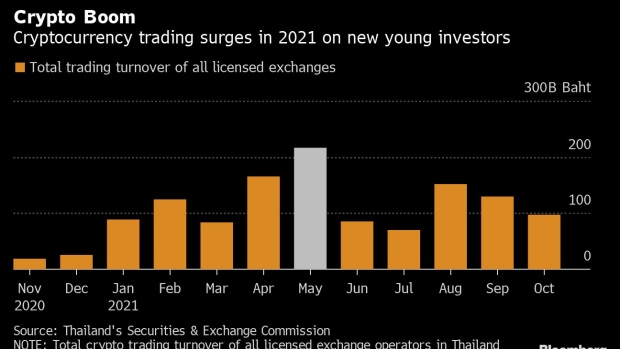 (Bloomberg) -- A Thai crypto exchange that notched up a valuation of more than $1 billion in less than four years is planning to offer a range of digital currencies and services in more countries “to become the Coinbase of Southeast Asia,” according to its chief executive officer.

Bangkok-based Bitkub Online Co. is exploring opportunities to set up its own units or partner with existing players in countries such as Malaysia, the Philippines and Laos next year, Jirayut Srupsrisopa said. The technology and products will likely remain the same as offered by Bitkub, he said.

Bitkub’s regional expansion is spurred by its success in Thailand where it commands a near-monopoly and has grown its revenue more than 1,000% annually since it began operations in 2018. The exchange, in which Siam Commercial Bank Pcl acquired a majority stake in November, is betting on an “exponential growth” in digital currency wallets to one billion globally in five years, from just about 80 million currently, Jirayut said.

“Our strategy is to expand in countries that have no clear winners yet and are under-banked, with high social media usage and the potential to use cryptocurrency for remittances,” Jirayut said. “The expansion will be achieved either through new ventures or acquisitions. The goal is to become the Coinbase of Southeast Asia.”

Coinbase Global Inc., the biggest U.S. cryptocurrency exchange that went public with a direct listing on Nasdaq Exchange Inc. earlier this year, is among the platforms that have benefited from growing investor interest for digital tokens that’s pushed the global cryptocurrency market cap to about $2.75 trillion.

Bitkub may keep away from countries already dominated by other big players, Jirayut said citing the example of Indodax in Indonesia, as such a strategy would allow it to monopolize new markets.

While regulations in Southeast Asia are still not favorable to cryptocurrencies and non-fungible tokens, many sectors have already embraced them. Jirayut said he’s optimistic that policy makers and regulators will eventually back digital currencies because “they can’t avoid it forever.”

While Singapore is seeking to cement itself as a key player for cryptocurrency-related businesses, China has cracked down on large amounts of activity in recent months and India is said to be considering a proposal to treat cryptocurrencies as a financial asset while safeguarding small investors.

“We have kept on going despite calls from the anti-money laundering agency and the central bank,” Jirayut said. “Regulations have always followed innovation. The majority of people would have given up because of these regulations. We’re crazy enough to keep going.”

Even as regulations are still evolving, Thai developer Sansiri Pcl is accepting digital currencies as payments, the Tourism Authority of Thailand is planning digital tokens for travel, and steel tycoon Win Suteerachai is pushing for the legalization of cryptocurrencies and NFTs, a key policy for the upcoming elections by his Ruam Thai United Party.

A 24-hour turnover of $549 million ranked Bitkub at 59th among more than 300 exchanges worldwide ranked by CoinMarketCap.

Other highlights from Jirayut interview: