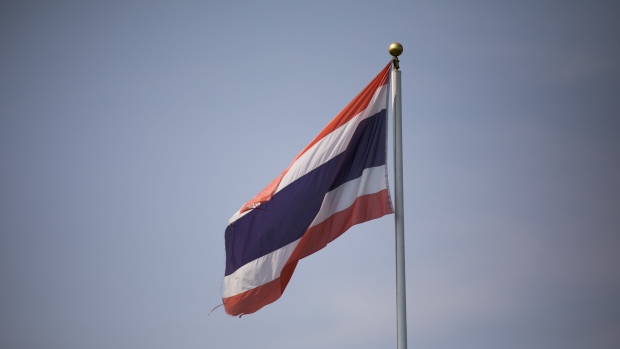 A Thai flag flies in Khon Kaen, Thailand, on Friday, March 8, 2019. Thaksin Shinawatra hasn’t set foot in Thailand since he was convicted in a corruption case brought after a 2006 coup that deposed him. But in the poor northeast the billionaire former prime minister’s allies have won won every election since 2001. The March 24 election will again test whether Thailand’s rural masses repudiate its coup-prone generals, who’ve ruled the country since seizing power in 2014. Photographer: Brent Lewin/Bloomberg , Bloomberg

(Bloomberg) -- A mass shooting that began with a daycare center in northeastern Thailand left 38 people dead, the majority of them children, according to officials.

After fleeing the scene, the assailant shot dead more people as he drove back to his house, where he killed his wife and child before taking his own life, Jackrapat said. The attack also left 10 injured, six of them seriously, according to Surachate Hakparn, deputy chief of the Royal Thai Police.

The motive behind the crime was unclear but the shooter, identified as Panya Kamrab, was believed to be under the influence of drugs, Jackrapat said.

National police chief Damrongsak Kittiprapas, who flew to the site of the attack, said the shooter was fired from service after being arrested for possession of drugs.

The assailant was set for a court appearance on Friday in the drug case that led to his dismissal, Damrongsak said.

Prime Minister Prayuth Chan-Ocha ordered a probe into the “horrifying” crime and the police to fast-track the investigation. Authorities ordered the closure of all daycare centers in the area.

While mass shootings are not very common in Thailand, a soldier shot dead two of his colleagues at a military facility in Bangkok last month. Twenty-nine people were killed during a mass shooting in Nakhon Ratchasima in Thailand’s northeast in 2020.