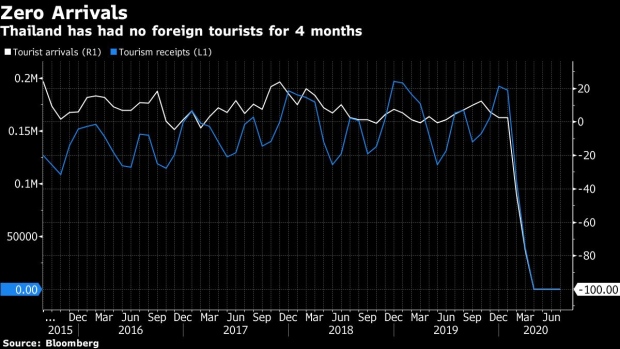 Visitors observe social distancing regulations while sitting on beach chairs under umbrellas at Bangsaen Beach in Chonburi, Thailand, on Sunday, June 14, 2020. Thailand said a number of countries, including China and Japan, are interested in discussions about travel bubbles, as the nation considers protocols for the eventual return of foreign tourists. Local tourism has already restarted. Photographer: Andre Malerba/Bloomberg , Bloomberg

(Bloomberg) -- Thailand’s economy could contract for a second straight year in 2021 if it takes a cautious approach to reopening its tourism industry, according to a central bank official.

If Thailand remains closed to foreign tourists until a vaccine is widely available -- which isn’t expected until late in 2021 -- Southeast Asia’s second-largest economy will miss out on a global growth rebound, according to Bank of Thailand Senior Director Don Nakornthab. If curbs last into next year, tourist arrivals may reach only 3-4 million, far off the government target of 12 million, Don wrote in an article on the central bank’s website.

Prime Minister Prayuth Chan-Ocha’s plan to gradually welcome foreign tourists hit a roadblock after the nation earlier this month reported the first case of local virus transmission in 100 days, and some local groups opposed offering special permits for visitors to the resort island of Phuket. The pandemic has devastated tourism, the cornerstone of Thailand’s economy, which provided more than $60 billion in revenue from about 40 million visitors in 2019.

“People should understand that it’s almost impossible to have zero new local cases forever, and the economic cost that the nation needs to pay for this is very high,” Don wrote in Thai. “Exposure to foreign tourists has to be done carefully, gradually and consistent with the situation of the external epidemic, and it may initially be done in the form of a sandbox,” he said referring to tourist access being limited to certain areas and groups.

Don’s views are personal and not necessarily in line with the opinion of Bank of Thailand, the central bank said.

On Tuesday the Cabinet approved special long-stay visas for foreign tourists, with a mandatory 14-day quarantine, government spokeswoman Traisuree Taisaranakul said. The government expects about 1,200 visitors to avail themselves of these visas each month, generating about 1.2 billion baht ($38.5 million) in revenue per month, she said.

Thailand’s economy is on track for its worst contraction on record this year, with the Finance Ministry predicting an 8.5% decline as tourism and trade remain depressed. The Bank of Thailand forecasts 5% growth in 2021, based on 16 million foreign tourist arrivals, but that may be “too optimistic,” Don wrote.

“If Thailand can’t open the nation to foreign tourists until there is a wide use of vaccine, the economy next year may face the phenomenon of not recovering even when the global economy picks up,” Don wrote.