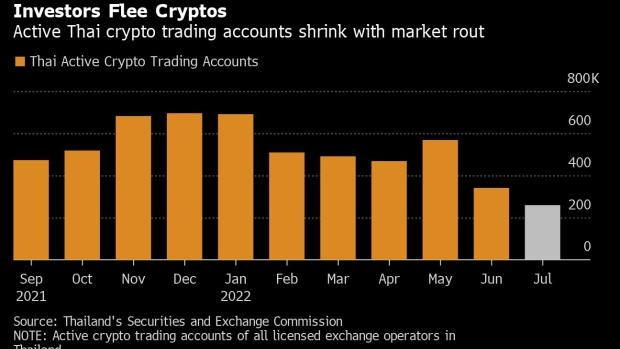 (Bloomberg) -- Thailand’s second-richest man -- who made most of his fortune in power generation -- is doubling down on his digital-asset plans despite increased scrutiny of the crypto industry and a decline in local trading accounts.

Sarath Ratanavadi, chief executive officer of Gulf Energy Development Pcl, said his company will boost investments in blockchain ecosystems to diversify earnings sources even as Thai regulators tighten supervision of fintech and related platforms amid a plunge in the value of many tokens.

The Bangkok-based company is seeking licenses to operate a digital-asset exchange and brokerage in partnership with Binance Holdings Ltd., the world’s largest crypto bourse by trading volume, said Sarath, whose $11.9 billion fortune matches that of oil tycoon and Dallas Cowboys owner Jerry Jones, according to the Bloomberg Billionaires Index.

“Digital assets and blockchain technology platforms will be the key drivers for the company’s strongest returns, and our aim is to become the country’s market leader,” Sarath said in an interview Wednesday. “Recent issues involve individual cases, with the overall market still being sound and having high potential.”

The number of active crypto-related trading accounts in Thailand shrank to about 260,000 in July from a peak of almost 700,000 in December, official data show. Trading turnover of cryptocurrencies at Thailand’s licensed exchange operators slid to 54 billion baht ($1.5 billion) in July, the least since January 2021.

The interview with Sarath on the sidelines of a conference organized by the Stock Exchange of Thailand was conducted a day before SCB X Pcl, which owns Thailand’s second-largest bank by market value, announced the termination of an 18 billion baht deal to buy a majority stake in Bitkub Online Co., the country’s largest cryptocurrency exchange.

“Whilst the results of the due diligence exercise did not reveal any significant abnormal issues which are irremediable, Bitkub is currently in the process of resolving various issues as per the recommendations and orders of the Securities and Exchange Commission,” SCB X CEO Arthid Nanthawithaya, said in a statement.

Expanding into the crypto community isn’t the only area of diversification for Sarath, who has an undergraduate degree in engineering from Chulalongkorn University in Bangkok and a master’s from the University of Southern California.

His flagship Gulf Energy has not only increased its investment in wind- and solar-energy projects to supplement gas-fired power generation, but it’s also taken a major stake in Intouch Holdings Pcl, which controls Thailand’s biggest wireless-services and satellite operator.

Brokerages are mixed on the outlook for Gulf Energy shares, with seven recommending buy, seven hold and one sell, according to data compiled by Bloomberg.

Other highlights from Sarath’s interview: