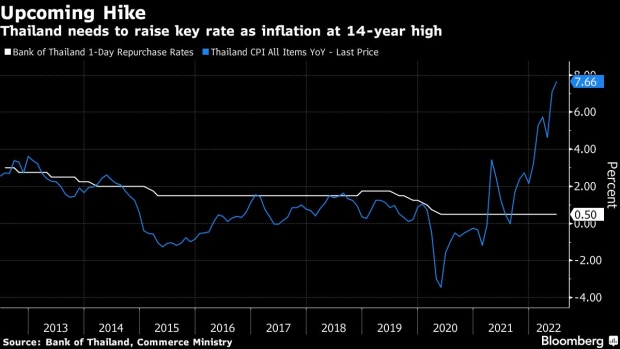 (Bloomberg) -- Thailand’s central bank should stay away from a steep policy tightening path to protect the economy’s nascent recovery while taming the fastest inflation in more than a decade, according to the country’s finance minister.

“They have to make sure the economy recovers, and at the same time they can curb down inflation,” Finance Minister Arkhom Termpittayapaisith said in an interview at his office in Bangkok on Monday, two days before the Bank of Thailand’s rate review. “If you need growth, then the increase in the rate may be not so much surely.”

The BOT is expected to raise borrowing costs from a record low on Wednesday to tame inflation hovering at a 14-year high. The authority had bucked the trend of central banks from the Philippines and India in hiking rates amid concerns about derailing an economy that’s only just recovering from the pandemic.

Still, any rate action this week by the BOT may be measured. Twenty-four of 27 economists in a Bloomberg survey as of Monday predicted a quarter-point hike on Wednesday, with the remaining three expecting a half-point increase.

The central bank must consider whether its actions to curb inflation would also affect consumption and cost of doing business, said Arkhom who added he’s been talking to BOT Governor Sethaput Suthiwartnarueput. “We have to balance, making sure we are in the path of recovery,” the finance chief said.

The government, Arkhom said, has also done its share in battling rising prices through subsidies for diesel and power prices.

“You can counter inflation but into what degree? At the same time, we also need people to spend,” Arkhom said. He sees inflation, which came in at 7.6% last month, peaking this quarter and slowing as global oil prices ease.

Already, the Southeast Asian nation is seeing the return of stronger consumption as tourism rebounds and household incomes start to recover. The government’s latest forecast is for foreign tourist arrivals to reach as many as 30 million next year from about 10 million this year.

“The upside on economic growth really depends on tourism,” Arkhom said, predicting that the Thai economy would fully recover by 2024. Thailand hosted 40 million foreign travelers in the year before the pandemic and counts tourism as a major source of revenue.

Gross domestic product growth is likely to reach 3.5% for this year although expansion in the three months to June “may not be that high” due to base-effect from a 7.7% GDP growth in the second quarter of 2021, he said. The government will report the data on Aug. 15.

On the exchange rate, Arkhom said that while exporters are happy when the baht is at the 34-35 per dollar, a stable currency is crucial for businesses as it also makes imports, especially oil, more expensive.

The central bank must be mindful of how intervention is viewed by countries like the US which previously accused Thailand of currency manipulation, he said. The baht has weakened about 8% in the past six months, making it the third-worst performer among key Asian currencies tracked by Bloomberg.