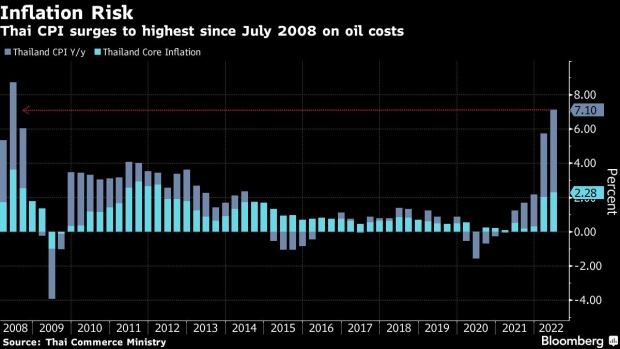 A market vendor waits for customers at Silom Market on Silom Road in Bangkok, Thailand, on Tuesday, April 26, 2022. Thailand's finance ministry revises 2022 GDP growth to 3.5%, down from a previous estimate of +4% on Wednesday. Photographer: Luke Duggleby/Bloomberg , Bloomberg

(Bloomberg) -- Thailand’s retail inflation quickened in May to its highest in nearly 14 years, a level that may test the central bank’s resolve to stand pat on borrowing costs.

Consumer prices rose 7.1% from a year earlier, accelerating from 4.7% a month ago, official data showed Monday. That’s faster than the median 5.9% gain predicted by economists in a Bloomberg survey and the highest since July 2008.

The uptick in the inflation rate was driven mostly by energy and food items, a development that was forseen by Bank of Thailand Governor Sethaput Suthiwartnarueput. Still, inflation at more than double the central bank’s 1%-3% target days before the monetary policy review will make it difficult for policy makers to ignore the print, given the outlook is clouded by Russia’s war-induced supply snarls.

Inflation may accelerate in June as continued increase in fuel prices have raised the costs of transportation and logistics and a weak baht has driven up the price of imported raw materials and products, Trade Policy and Strategy Office Director-General Ronnarong Phoolpipat said.

“There remains immense pressure on inflation as fuel and energy costs continue to climb further,” said Ronnarong. “We just wish that the OPEC’s oil production increase will start to bring the prices of crude down.”