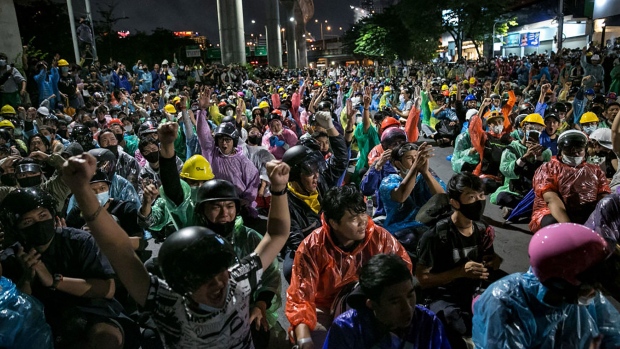 (Bloomberg) -- Anti-government protesters in Thailand planned to gather again in Bangkok on Sunday despite a ban on large groups and police crackdowns on demonstrations in recent days.

Protest organizers are using social media to arrange rallies without giving exact locations ahead of time to avoid being thwarted by authorities. A similar tactic was used on Saturday when tens of thousands of protesters met at several venues across the capital.

Several rail stations have been ordered to shut ahead of Sunday’s demonstrations, according to a police statement.

Organizers had told supporters of the movement in Bangkok to be ready at train stations by 3 p.m. local time to await further instructions. They later announced the protest will be held at Victory Monument in central Bangkok.

Several protests are also planned in other cities across Thailand.

Prime Minister Prayuth Chan-Ocha had asked authorities to be on the lookout for groups that may incite violence during protests, government spokesman Anucha Burapachaisri said on Sunday.

The protesters are calling for greater democracy and reform to the monarchy. They have broken long-held taboos about publicly criticizing the royal family and have questioned laws that stifle discussion of the monarchy.

They’re also calling for the resignation of Prayuth’s government and a rewriting of the constitution, which was drafted by a military-appointed panel after the premier, a former army chief, took power in a 2014 coup. The activists say the charter was instrumental in helping Prayuth retain power after the 2019 elections.