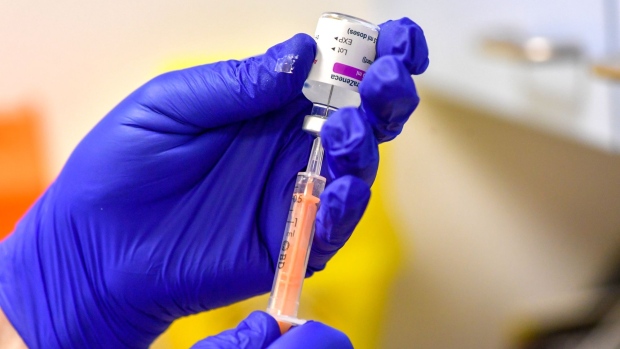 People watch a live news broadcast of Indonesia's President Joko Widodo receiving a dose of the Sinovac Biotech Ltd. Covid-19 vaccine, in Jakarta, Indonesia, on Wednesday, Jan. 13, 2021. Jokowi, as the first president's widely know, received the first dose of China's Sinovac vaccine in a televised event as he seeks to build public confidence in the shots. , Bloomberg

Thousands of people in Singapore and Indonesia have already received the Pfizer Inc.-BioNTech SE and Sinovac Biotech Ltd. vaccines, and their neighbors are signing more deals to procure supplies. China is also giving free vaccines to countries like the Philippines and Cambodia.

Wealthier but smaller Singapore -- the first in Southeast Asia to start an official Covid-19 vaccination program -- began inoculating healthcare workers with the Pfizer shot on Dec. 30. Its prime minister got his first dose on Jan. 8 and more than 60,000 individuals have received theirs as of Jan. 22.

​Strategies are evolving across the region as different supply deals are sealed. In the Philippines, President Rodrigo Duterte says he will take a Russian or Chinese vaccine, but his government’s first approval was for the Pfizer shot and the country says it’s close to a deal with Moderna Inc.

Indonesia, which is battling the worst outbreak in Southeast Asia, ended 2020 by switching up who’s on its priority list for shots -- focusing on the elderly first instead of the young as previously announced. It was the earliest in the region to receive a vaccine shipment with a Sinovac supply in December.

Some countries are also involved in vaccine development and manufacturing, a testament to the variety of strategies employed by Southeast Asian nations. Here’s how the region of more than 650 million people is dealing with differing fiscal, demographic and distribution challenges in their vaccine strategies.

Indonesia seeks to vaccinate 181.5 million people -- about two-thirds of the population -- by March 2022 and President Widodo has called on the cabinet to complete the program by end-2021.

The nation expects its vaccination program to cost more than 73 trillion rupiah ($5.2 billion). It plans to be able to vaccinate 16 million people a month; the initial phase of inoculations will target 1.3 million health workers and 17.4 million public workers nationwide during the first quarter of 2021.

The country will offer free vaccines to people. With about 13,000 community health centers and 9,000 hospitals across the country, the government says it will be able complete its targeted vaccination to achieve mass immunity.

Malaysia’s government aims to get as many people inoculated within a year of getting the first batch of vaccines in February, Science Minister Khairy Jamaluddin said in mid-January.

The nation’s vaccination program will focus on healthcare workers, the elderly and those with chronic diseases, while individuals under 60 will get immunized by or after the third quarter, he said, adding the immunization drive will be staggered over 18 months.

Malaysia is spending $504 million to buy enough shots to cover 26.5 million people, or about 80% of its population. It will start vaccinations from February, according to Prime Minister Muhyiddin Yassin.

The country will have a “slight extra” stockpile of vaccines as only those 18 years old and above will be inoculated. The excess vaccines will be administered to migrant workers, expatriates, and non-Malaysian residents, the cost of which must be borne by their employers.

Pfizer vaccines will probably be administered to those in urban areas due to the need for ultra-cold storage, while AstraZeneca vaccines will be deployed to rural areas.

Myanmar expects to start inoculating its nearly 55 million population at the end of January. Frontline health workers and key government officials will be prioritized in the first phase of vaccination, to be followed by vulnerable groups such as those older than 65 years.

Myanmar’s Covid vaccination fund now has $267.1 million, and well-wishers continue cash donations, de facto leader Aung San Suu Kyi has said. The government expects more than 40% of Myanmar’s population to be inoculated by the end of this year.

The government has also been cooperating with GAVI, the vaccine alliance, to get shots for 20% of its population through the Covax facility.

The Southeast Asian nation is also planning to allow the private sector to import WHO-approved vaccines later this year.

The Philippines plans to buy 148 million vaccine doses to inoculate up to 70 million people this year, or more than half of its population.

The nation is eyeing 82.5 billion pesos ($1.7 billion) in vaccine purchases that it plans to fund with financing from multilateral agencies, state-owned banks and companies and bilateral sources, vaccine czar Carlito Galvez said.

A number of mayors in Metropolitan Manila have separately drafted plans to provide shots to their constituents while waiting for guidelines on how local government units can purchase the vaccines, according to Paranaque City Mayor Edwin Olivarez, who also heads the Metro Manila Council of mayors.

Priority for vaccinations will be given to medical frontliners and workers in industries deemed critical, including low-income groups and those identified as at risk.

The city-state has set aside roughly S$1 billion ($754 million) for vaccines, tapping the likes of Arcturus Therapeutics Holdings Inc., Moderna Inc., Pfizer and Sinovac for supplies. It estimates it should have enough for its around 5.5 million-strong population by the third quarter of 2021.

The city-state is prioritizing healthcare workers, the elderly and those in jobs or settings where risk of a super-spreading event is high -- such as the construction, marine and process sector, including migrant workers. For the elderly, it will begin with seniors aged 70 and above.

The allocation of vaccines will largely be based on medical indications, suitability and availability, the health minister said in January.

Singapore aims to vaccinate the entire adult population, though this will be voluntary. Vaccines will be free for all Singaporeans and long-term residents.

Thailand wants to inoculate about 50% of its population by the end of this year.

It has previously said it will allow private companies and hospitals to import and sell Covid-19 vaccinations as long as those shots have been approved by the nation’s Food and Drug Administration.

Thailand’s health regulator endorsed AstraZeneca’s vaccine for emergency use, the health minister said on Jan. 21. It’s the first to win approval in Thailand, which also has ordered shots developed by China’s Sinovac Biotech.

The Southeast Asian nation plans to distribute shots free of cost, while the imports by private firms would allow those who can afford to pay for inoculations along with non-Thais an alternative pathway to get shots.

Vietnam is working on developing vaccines and will work with suppliers when vaccines are available, according to a spokeswoman at the foreign affairs ministry.