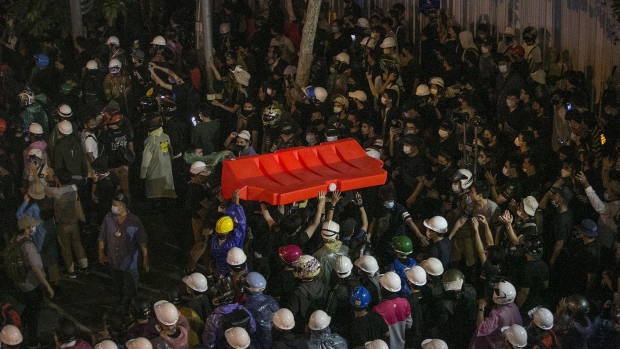 (Bloomberg) -- Thailand is set for a fresh wave of street protests by pro-democracy activists with Prime Minister Prayuth Chan-Ocha ignoring their deadline to quit by Saturday.

Free Youth and the United Front of Thammasat and Demonstration, two of the main protest organizations, have vowed to stage mass gatherings until all of their demands, which include a rewriting of the constitution and reform of the monarchy, are met.

The withdrawal of a state of emergency in Bangkok and convening of a special session of parliament next week have failed to placate protesters. Government spokesman Anucha Burapachaisri on Saturday said a solution through the parliamentary process was the most appropriate because elected lawmakers represent all sections of society.

Anucha declined to comment on the protesters’ deadline for the premier to quit, but Prayuth said this week the government and the activists should “each take a step back” and “find solutions to the problems.”

Parit Chiwarak, one of the protest leaders, said in a note from jail that “if Prayuth wants to see the country move forward, he would need to resign within three days as the public demanded.”

The youth-led protesters are calling for the constitution, drafted by a military-appointed panel after the 2014 coup, to be reworked, claiming it was instrumental in helping Prayuth retain power after the 2019 elections. The issue will be on the agenda of a special parliament session, Anucha said.

The prime minister has become “vulnerable” after failing to stem the protests, which may eventually pave the way for his ouster, Christopher Ankersen, associate professor at New York University’s School of Professional Studies Center for Global Affairs, said.

“It’s feasible that he could be removed from office either through a political machination of some kind within his own party, or via a military coup, an autogolpe, or some other route, such as a formal royal intervention,” Ankersen said. “Such a move could be used as a sop to the protesters, a way of forestalling real change, while addressing at least one of the main protest demands.”

Read: Why Protesters Are Back on the Streets in Thailand

The protesters have broken long-held taboos about publicly criticizing the royal family, with demands for the monarch to no longer endorse coups, provide transparency in how funds are spent, and get rid of laws that stifle discussion of the royal family. The unprecedented targeting of the monarchy has also triggered rallies by pro-royalist groups, raising fears of clashes between the rival groups.

King Maha Vajiralongkorn greeted some pro-royalist supporters at an event on Friday and he praised a man for holding up a royal portrait among the anti-government protesters, according to a video footage post on social media. It was a signal that the king acknowledges the challenge to his authority by the protests, while showing his support to the pro-royalist movement, according to James Buchanan, a visiting lecturer at Mahidol University in Thailand.