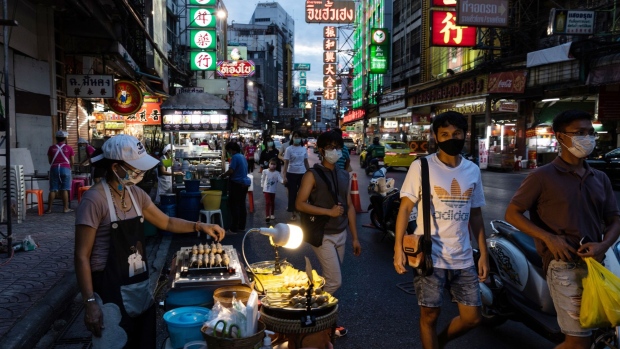 Pedestrians walk past street food stands at Yaowarat Road in the Chinatown area of Bangkok, Thailand, on Wednesday, May 26, 2021. It could take another five years before tourism revives fully in Thailand -- which closed its borders to most foreign visitors in March 2020 -- an ominous sign for one of the most travel-dependent economies in the world. Photographer: Luke Duggleby/Bloomberg , Bloomberg

(Bloomberg) -- Thailand agreed to halve its mandatory quarantine to seven days for fully vaccinated visitors starting next month, and will remove any isolation period for such travelers in 10 key provinces including Bangkok in November to help revive its tourism-dependent economy.

The country’s main Covid-19 task force also approved the reopening of a variety of businesses and services, including theaters, sports venues and nail salons, as of Oct. 1, when a nightly curfew in many parts of the country will be cut by one hour, according to spokesman Taweesilp Visanuyothin. The new curfew hours will be from 10 p.m. to 4 a.m.

The Southeast Asian nation previously delayed and adjusted its tourism-reopening program several times due to low vaccination rates and concerns that the easing of rules would enable infections and hospitalizations to surge again. The program began in July in the resort island of Phuket, after a high number of vaccine doses were delivered and administered.

The latest decisions by the virus panel, chaired by Prime Minister Prayuth Chan-Ocha, are part of its “living with Covid” strategy to restart the economy, while maintaining infections at a level that doesn’t overwhelm Thailand’s health-care system. The moves come after the pace of inoculations have been ramped up to major population and economic centers, with as many as 1 million doses administered daily in the past week.

Before the pandemic in 2019, Thailand’s tourism sector attracted nearly 40 million visitors annually and generated about $60 billion per year. Various plans to ease restrictions on both domestic and international travel, as well as an array of businesses have been hampered by vaccine shortages and clusters of infections in markets and factories.

The latest round of relaxations include: