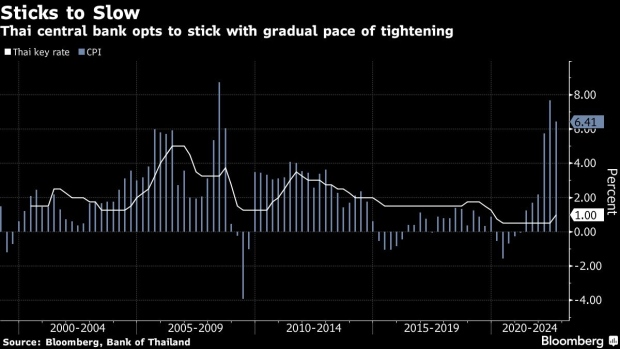 Workers unload flowers from a truck at Pak Khlong flower market in Bangkok, Thailand, on Monday, Oct. 3, 2022. The Bank of Thailand earlier retained the economy’s annual growth outlook for this year at 3.3%, which will be the slowest pace in the region. , Bloomberg

(Bloomberg) -- Thailand is set to raise its key rate by a quarter point for a third straight meeting as an accelerating economic growth aided by tourism revival risks stoking prices.

The Bank of Thailand will increase the benchmark one-day repurchase rate by 25 basis points to 1.25% on Wednesday, according to all but one of 21 economists in a Bloomberg survey. One expects the central bank to hold the rate.

Thailand’s gradual tightening approach, once regarded by some analysts as too little to cool price gains at a 14-year high and a currency hitting a 16-year low, now looks more appropriate. Southeast Asia’s second-largest economy is gaining momentum as more foreign tourists return. Gross domestic product growth in the third quarter quickened to 4.5% from a year ago, the fastest pace in more than a year.

“The combination of improving economic activity, rising core inflation and still elevated short-term inflation expectations supports the case for a continued reduction in policy accommodation” even as pressure on the BOT to tighten more aggressively has eased, Krystal Tan, an economist at Australia & New Zealand Banking Group, wrote in a Nov. 25 note.

Assistant Governor Piti Disyatat told a business summit earlier this month that the BOT won’t be surprising the market on Nov. 30 and  “you can expect continuation of what we are doing.”

Here’s what to watch out for in Thailand’s rate decision, expected at 2 p.m. local time:

The BOT, which projected foreign visitors of 9.5 million for 2022 and 21 million in 2023 at the September meeting, may revise those estimates on Wednesday. Arrivals totaled 7.2 million in the first 10 months, with at least 1.5 million more a month expected for the remainder of the year.

The monetary authority may revise its outlook of the economy after predicting GDP growth rates of 3.3% for this year and 3.8% next year at its last meeting. It may also revisit projections of average headline inflation of 6.3% for 2022 and 2.6% for 2023.

“The rebound in the economy will give the central bank the confidence it needs to press ahead with further tightening,” according to Gareth Leather, senior economist at Capital Economics Ltd.

Goldman Sachs Group Inc. foresees sustained 25-basis-point rate increases until the Thai policy rate reaches 2.5% in the third quarter of 2023 on robust growth, elevated inflation and widening interest rate differentials with other countries, it said in a Nov. 25 note.

The baht earlier this month posted its biggest one-day gain in more than 15 years, bolstered by the possibility of a slower Federal Reserve tightening and easing pandemic restrictions in China.

The performance of the currency in a country dependent on tourism and exports, is a double-edged sword. While a weak baht is helping Thailand’s tourism recovery, excessive volatility at times has caused tensions among policymakers.

The BOT has been more restrained in tightening compared to peers and “this relatively dovish bias tells us that it will now look for every opportunity to hold off on further hikes, if possible,” Chanco said.