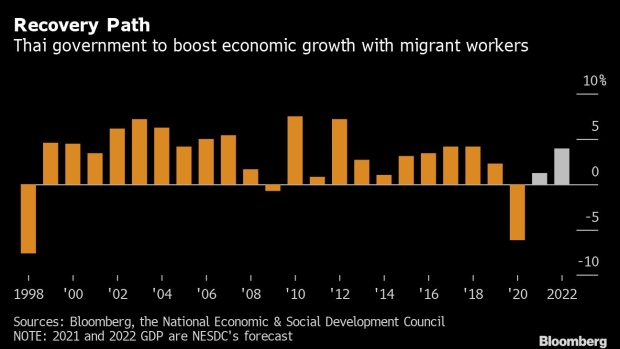 (Bloomberg) -- Thailand plans to allow more foreign workers into the country starting next month to fill a labor shortage that has hurt manufacturers and poses a risk to an economy that’s just starting to recover from the Covid-19 outbreak.

The government is allowing illegal workers now in Thailand to register by the end of the month to assess how many more people to allow in from neighboring countries, such as Myanmar, Cambodia and Laos. Labor Minister Suchart Chomklin said he expects about 100,000 will be counted, with the overall shortage estimated at about 300,000.

“We will start prosecuting illegal workers from next month because we can’t take any risks that will lead to any new outbreak,” Suchart said. Thailand had about 2.5 million foreign workers before the pandemic, with at least one-fifth having left the country since the start of the pandemic.

Prime Minister Prayuth Chan-Ocha has faced a dilemma between supporting the nascent economic recovery with migrant workers and containing the virus, with many foreign laborers infected because they lived in crowded camps and had limited access to vaccinations. The economy contracted 6.1% last year, the most in more than two decades. It’s forecast to expand by about 1.2% this year.

The Federation of Thai Industries said manufacturers need at least 500,000 foreign workers, with focus on the construction and food sectors. Thai Union Group Pcl, owner of Chicken of the Sea and John West seafood brands, reported a 5.8% year-on-year drop in its third-quarter profit, citing supply-chain disruption and limitations on its workforce during the outbreak.

The government plans to bring in more workers under memorandum of understandings with neighboring countries. Migrants will be required to quarantine for as many as 14 days and pass RT-PCR tests. The prime minister asked the Health Ministry to set aside 500,000 doses of vaccines for those workers, Suchart said.

“We have labor shortages because many Thai people avoid doing hard and heavy jobs, which are filled up by migrant workers,” said Thanavath Phonvichai, president of the University of Thai Chamber of Commerce. “It’s necessary to bring them in. If not, the production both in the farming and manufacturing sectors won’t meet targets and will hurt the economic recovery.”