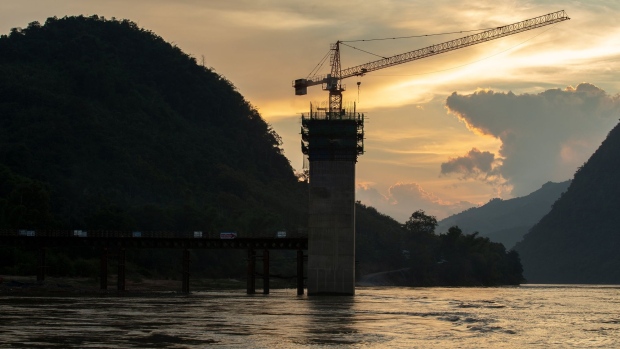 The Ban Ladhan Railway bridge, a section of the China-Laos Railway built by the China Railway Group Ltd., stands under construction on the Mekong River in Ban Ladhan, Luang Prabang province, Laos, on Thursday, Oct. 18, 2018. China's Belt and Road initiative plans to connect Southeast Asian countries with the southwest region of Yunnan through a series of high-speed railways. There are three routes planned: a central one that runs through Laos, Thailand and Malaysia to reach Singapore; a western route through Myanmar; and an eastern one through Vietnam and Cambodia. Photographer Taylor Weidman/Bloomberg Photographer: Taylor Weidman/Bloomberg , Bloomberg

(Bloomberg) -- Thailand said it will complete its part of a much-delayed high-speed rail system linking the country to China through Laos by 2028, with bilateral trade and economic development key benefits.

The Southeast Asian nation pledged to finish the first of two stages to the 434 billion baht ($12 billion) project by 2026. In total, Thailand’s segments will comprise 609 kilometers (378 miles) going from Bangkok to the northeastern border province of Nong Khai, where a bridge will be built over the Mekong River to connect with the China-Laos line, Thai officials said at a briefing on Wednesday.

“There were some procedural steps which have caused some delays but we’re making constant progress,” Arjaree Sriratanaban, director-general at the Department of East Asian Affairs at Thailand’s Ministry of Foreign Affairs, said at a briefing in Bangkok. “The Thai government emphasizes the importance of this project as we support regional connectivity.”

Laos opened a rail line in December that cost the landlocked country nearly $6 billion to link with China.

Thailand has completed 12% of the first stage, expects a test run by 2026 and the official launch the following year, according to Pichet Kunadhamraks, director-general of Department of Rail Transport. That 253-km stretch, budgeted at 180 billion baht, will run from the Thai capital to Nakhon Ratchasima province. The second section, with a price-tag of 254 billion baht for 356 km, will go further northeast to the border with Laos, according to officials.

The Chinese foreign minister said at a briefing on Tuesday that the “economic corridor” connecting China, Laos and Thailand will promote logistics, trade and economic development.

The Laos and Thailand segments are seen by many as the start of infrastructure that will directly connect the world’s second-largest economy with much of Southeast Asia, including Malaysia and Singapore.