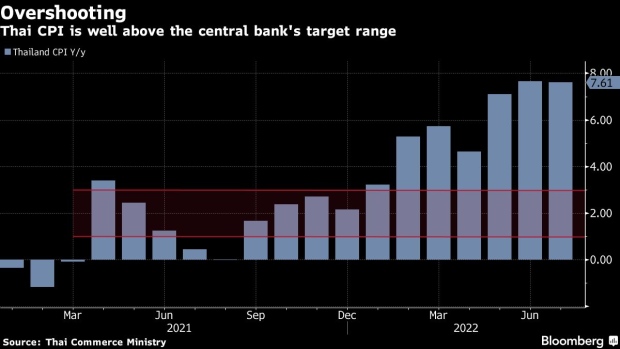 Tourists are seen through the windshield of a tuk-tuk on Khaosan Road in Bangkok, Thailand, on Saturday, July 2, 2022. Foreign tourist arrivals into Thailand are set to beat official forecasts with the lifting of pandemic-era restrictions, a rare positive for the nation’s Covid-battered economy and currency. , Bloomberg

The bank’s monetary policy committee on Wednesday decided to increase the one-day repurchase rate by 25 basis points to 0.75% as forecast by 24 of 27 economists in a Bloomberg survey. The remaining three had predicted a 50-basis-point hike. The rate was last increased in December 2018.

“The committee views that the policy rate should be normalized to the level that is consistent with sustainable growth in the long term,” the Bank of Thailand said in a statement. “Monetary policy normalization should be done in a gradual and measured manner consistent with the growth and inflation outlook in the period ahead.”

Thai 2-year bond yields dropped by 4 basis points after the expected move, while the baht fell as much as 0.5% against the dollar, which Scotiabank currency strategist Qi Gao attributed to the outlook for a slower pace of hike. The benchmark stock index was down as much as 0.8% before trading 0.4% lower.

Wednesday’s action follows months of central-bank speak on the need to raise rates sooner to avoid large moves later to fight above-target inflation. A gradual approach was already favored by Finance Minister Arkhom Termpittayapaisith, who on Monday underlined the need to preserve growth, putting Thailand on a slightly different path from peers Philippines and India that have each raised their policy rates by more than 100 basis points in response to the Federal Reserve’s tightening.

“The guidance was quite clear that BOT will not be more aggressive,” said Euben Paracuelles, chief Asean economist at Nomura Holdings Inc. in Singapore. “That’s the same language as in Malaysia and thus supports our forecast that more hikes are coming but in 25 basis-point clips, not 50 basis points.”

“It continues to favor a gradual pace, but said it would closely monitor movements in the baht and financial markets. This allows scope for inter-meeting policy adjustments, if needed.”

The Thai government sees gross domestic product expanding 3.3% this year, in line with the central bank’s forecast in June. The pace of expansion is poised to be among the slowest in Southeast Asia in 2022.

“Too big an increase may raise bad debts and put pressure on banks,” he said. “There is no need to rush” with raising the policy rate.

The Thai economy is expected to return to the pre-COVID level by the end of this year and will continue to gain traction as foreign tourists return, the central bank said, while flagging risks to recovery from rising living costs.

While headline inflation rate at 7.61% last month was a tad below June’s 7.66%, it’s still way above the central bank’s 1%-3% target. Core price gains, which strips out volatile food and fuel items, was almost 3% in July, quickening from 2.51% a month earlier.

Inflation will remain at a high level throughout 2022, largely unchanged from the previous forecast, before gradually falling into the target range in 2023, the BOT said, without providing detailed economic estimates.

(Updates with economist comments in the sixth paragraph.)