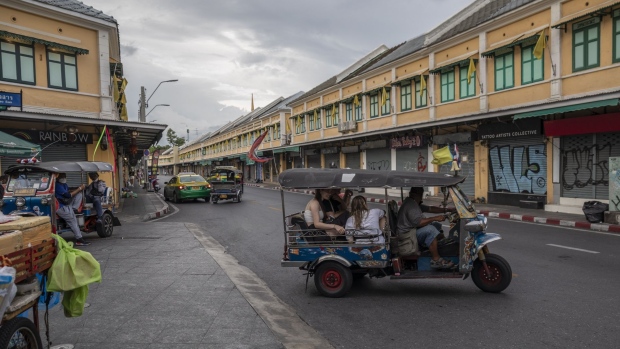 Tourists ride a tuk-tuk on Khaosan Road in Bangkok, Thailand, on Saturday, July 2, 2022. Foreign tourist arrivals into Thailand are set to beat official forecasts with the lifting of pandemic-era restrictions, a rare positive for the nation’s Covid-battered economy and currency. Photographer: Andre Malerba/Bloomberg , Bloomberg

(Bloomberg) -- The Thai economy grew at a slower pace than economists estimated last quarter as the fastest inflation in 14 years probably weighed on sentiment and offset gains from the return of foreign tourists.

Gross domestic product rose 2.5% in April-June from a year ago, the National Economic and Social Development Council said Monday, which was below the median estimate for a 3.1% expansion in a Bloomberg survey. Output expanded 0.7% compared with the first quarter against a median estimate of 0.9% growth.

Officials see full-year growth in a range of 2.7%-3.2%, slower than the 3.3% pace seen by Prime Minister Prayuth Chan-Ocha earlier this month. That puts Thailand on course for the slowest expansion in the Southeast Asian region in 2022, as it struggles with inflation at the quickest since 2008.

The baht fell the most in more than three weeks after growth came in weaker than estimated, with the currency down 0.5% to 35.516 against the dollar Monday morning. The agency sees the baht averaging 34.5-35.5 per dollar this year. The benchmark stocks index were little changed at open.

Thailand’s central bank last week lifted borrowing costs by a quarter-point, the first increase since 2018, to tame price gains and support the baht. Policy makers also vowed to keep the pace of tightening gradual so as to not stifle the economy’s recovery momentum.

Any intensification of the war in Ukraine remains a key risk to Thailand’s recovery, Danucha Pichayanan, the secretary-general of NESDC, said after the data release. Geopolitical tensions have expanded to Asia with China and Taiwan, which may lead to supply disruptions in auto and electronics sectors as Thailand imports 29% of semiconductor from Taiwan, he said.

Still, the government’s forecast for foreign visitor arrivals to return to 30 million levels next year from near 10 million this year bodes well for the economy, where tourism accounts for more than 10% of GDP.