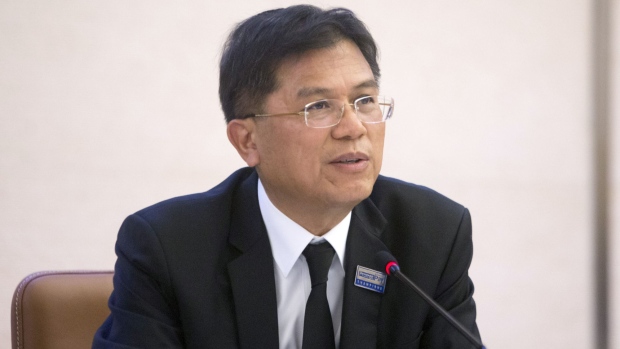 Pedestrians wearing face masks walk along Yoarawat Road in Bangkok, Thailand, on Wednesday, Feb. 5, 2020. The coronavirus impact is of particular concern to Thailand’s tourism industry, which makes up about 21% of the economy and has lost considerable business with the decline of travelers from China, its biggest customer base. Photographer: Andre Malerba/Bloomberg , Bloomberg

King Maha Vajiralongkorn sworn in Predee and Supattanapong Punmeechaow, a former senior executive of PTT Pcl, who was named a deputy prime minister and is in charge of the Energy Ministry, at a ceremony in Bangkok Wednesday. Five other ministers also took the oath of office, according to Narumon Pinyosinwat, the new deputy labor minister and a former government spokeswoman.

The challenges awaiting the new ministers include an economy headed for its worst performance with Thailand’s tourism and manufacturing industry in disarray following the outbreak of the coronavirus. While Prayuth’s administration has managed to contain the pandemic and resume most business activities, it’s had to contend with demonstrations by student groups demanding greater democracy and less power for the monarchy.

The Cabinet revamp was set in motion when the coalition’s biggest party, Palang Pracharath, picked Deputy Prime Minister Prawit Wongsuwan as its new leader, replacing Uttama Savanayana, who was finance minister until he resigned along with three cabinet ministers.

Thailand has announced stimulus worth $60 billion to revive its economy forecast by the finance ministry to contract 8.5% this year. Predee, a former co-president of Thailand’s No. 2 lender Kasikornbank Pcl, will need to work with incoming Bank of Thailand Governor Sethaput Suthiwart-Narueput to recalibrate the fiscal and monetary responses to pull Southeast Asia’s second-largest economy out of the doldrums.

Former army chief Prayuth led a military coup in 2014, ruled at the head of a junta for five years and returned as leader after a disputed election last year. His coalition steadily tightened its grip on power after forming the government.