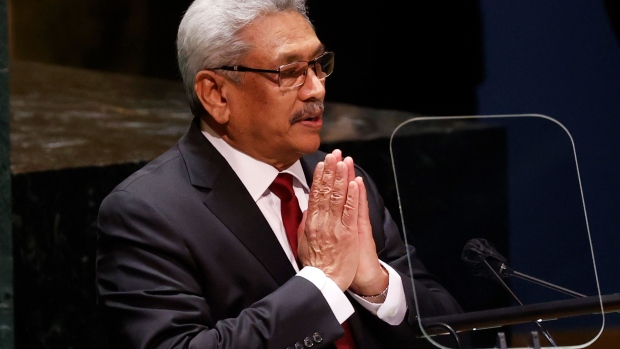 NEW YORK, NEW YORK - SEPTEMBER 22: President of Sri Lanka Gotabaya Rajapaksa speaks at the UN General Assembly 76th session General Debate in UN General Assembly Hall at the United Nations Headquarters on September 22, 2021 in New York City. More than 100 heads of state or government are attending the session in person, although the size of delegations are smaller due to the Covid-19 pandemic. (Photo by John Angelillo-Pool/Getty Images) , Photographer: Pool/Getty Images North America

Thailand has received a request from the current Sri Lanka government for Rajapaksa to enter the country, according to Tanee. The former president holds a diplomatic passport, which allows him entry into Thailand without a visa for 90 days.

“The stay is temporary in nature with the aim of onward travel. No political asylum has been sought,” Tanee said.

He also added the ministry has no information on Rajapaksa’s arrival date.

“The important thing is this doesn’t cause any problem for Thailand,” Foreign Minister Don Pramudwinai told local media in response to a question about whether Rajapaksa’s presence could cause tension with Sri Lanka’s government. “The foreign ministry doesn’t see a problem and there is no objection from the government.”

The Sri Lankan government supports the visit, Don added. “His allies and many of his colleagues are in the government.”

Rajapaksa fled to Singapore via the Maldives shortly after angry protesters stormed his official residence in the Sri Lankan capital Colombo on July 9. He formally resigned as president after arriving in Singapore on July 14.

“There is no cause to believe that Sri Lankan people in Thailand will cause a problem for us,” Don said. “It’s normal to escape heat for a cooler place during tough times.”

Officials in Sri Lanka have said the ousted leader is expected to return to the country but have given few details on when that will happen.

“Former presidents are entitled to certain facilities from Sri Lanka’s government,” cabinet spokesman Bandula Gunewardana said Thursday. He had no information about Rajapaksa’s travel plans or the promises made to the former leader by the government.

Veteran lawmaker Ranil Wickremesinghe, who was elected as the new president by the country’s parliament, is seen as a Rajapaksa ally. He won the election for the top job with the support of lawmakers from the former leader’s political party.