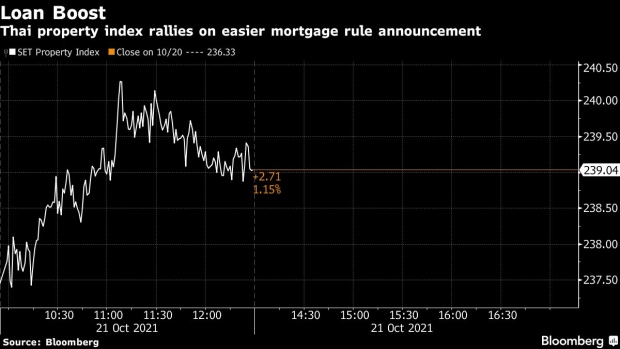 Home buyers can now take loans equivalent to 100% of the property’s value until the end of 2022, the Bank of Thailand said Thursday. That’s up from a loan-to-value range of 70% to 90% previously, with that ceiling dependent on the type and number of houses purchased.

The mortgage move is aimed at boosting the property sector and related businesses, which account for 9.8% of Thailand’s economy and employ 2.8 million people, Bank of Thailand Assistant Governor Roong Mallikamas told a news briefing Thursday.

Making home loans easier is the latest in a slew of “targeted measures” unveiled by the central bank in recent months to bolster Thailand’s fragile economic recovery as it preserves the limited monetary-policy space available after cutting interest rate to a record low of 0.5% to combat the pandemic.

“The outbreak has hurt our economic recovery significantly, so we need to have additional measures to help boost the economy,” said Roong. “This unlock will help draw excess savings and pent-up demand for property from medium-to-high income groups.”

A measure of Thai property developers rose as much as 1.7% to its highest level in more than four months. Origin Property Pcl, Major Development Pcl and Nusasiri Pcl jumped more than 7%. AP Thailand Pcl gained as much as 6.1%, Pruksa Holding Pcl climbed 6% and Supalai Pcl jumped as much as 11%%.

The Bank of Thailand foresees no risks to financial stability from any increase in speculation in the property sector because of the strong credit standards of financial institutions and the long-term ability of borrowers to repay debt, it said in a statement. The move won’t exacerbate the nation’s high household debt, as it mainly stems from personal loans and credit card spending, Roong said.

The higher housing-loan limit, along with other fiscal measures, should trigger new lending of 50 billion baht within one year, or about 7% of the 800 billion baht property-market value expected this year across Thailand, said Senior Director Don Nakornthab.

Other key information from the briefing: