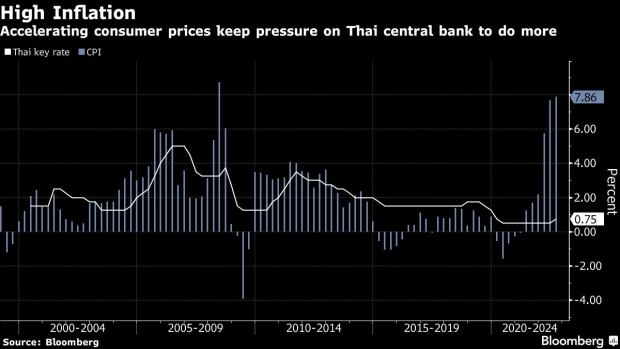 A customer hands money to a vendor at a wet market in Bangkok, Thailand, on Saturday, July 2, 2022. Foreign tourist arrivals into Thailand are set to beat official forecasts with the lifting of pandemic-era restrictions, a rare positive for the nation’s Covid-battered economy and currency. , Bloomberg

(Bloomberg) -- Thailand is poised to raise its policy rate for a second straight meeting, with a handful of economists expecting a more aggressive tightening as the baht’s plunge to a 16-year low threatens to further stoke inflation.

Bank of Thailand will raise the benchmark one-day repurchase rate by 25 basis points to 1% on Wednesday, according to 18 of 23 economists surveyed by Bloomberg. The rest predict a half-point increase, the first such adjustment since 2005.

In charting its tightening path, Thailand will have to strike a balance between shielding the fragile recovery of Southeast Asia’s second-largest economy as it reins in inflation pressures that can be aggravated by currency weakness. Governor Sethaput Suthiwartnarueput last month pledged the BOT will stick to a “gradual and measured” approach and do what the economy requires.

“The weakening baht also supports the case for the MPC (monetary policy committee) to raise the rate at the last two meetings this year to 1.25% to support the local currency and counter imported inflation,” said Kobsidthi Silpachai, head of capital market research at Bangkok-based Kasikornbank Pcl.

When BOT raised the rate for the first time in three years last month, policymakers voted 6-1 to increase by 25 basis points, with one of the monetary policy members calling for a half-point hike.

Here’s what to watch out for in the BOT statement, expected at 2 p.m. local time:

The central bank is also expected to release its latest economic forecasts this year and next at Wednesday’s meeting.

The market will watch out for any revisions in the central bank’s inflation forecast, which in June was at 6.2% average for this year and 2.5% in 2023. Price gains have accelerated to a fresh 14-year high to 7.86% in August. The BOT will also provide its latest assessment on economic growth, current account and tourism.

The monetary authority will likely raise its estimate on this year’s foreign visitors arrival from a previous 6 million forecast as Thailand has seen a bump since the scrapping of a pre-arrival registration requirement and insurance in July.

Arrivals were estimated at 5.26 million as of Sept. 21 this year, up from just 427,869 tourists in 2021, official data show. Tourism accounts for about 12% of gross domestic product and 20% of employment in Thailand. Before the pandemic, the land of smiles hosted about 40 million visitors annually.

The baht has weakened to its lowest level since 2006, losing about 12% this year. While the depreciation was in line with many of its neighbors, the slump in the currency can complicate the inflation battle of a net oil importer like Thailand.

In recent days, senior government officials including Prawit Wongsuwan, who is leading the government after a court last month suspended Prime Minister Prayuth Chan-Ocha, called for measures to halt the baht’s slide.

Finance Minister Arkhom Termpittayapaisith told the central bank on Thursday to closely monitor the currency and step in when necessary to curb extreme volatility. Since then, Arkhom said he’s not very concerned about the baht’s slump.

“The baht may continue to be weighed down by the weak external balance, as the ballooning goods trade deficit will likely result in another wide current account deficit in the third quarter,” said Ju Ye Lee, a Singapore-based economist at Maybank Kim Eng Research. She expects a 50 basis points rate increase on Wednesday.