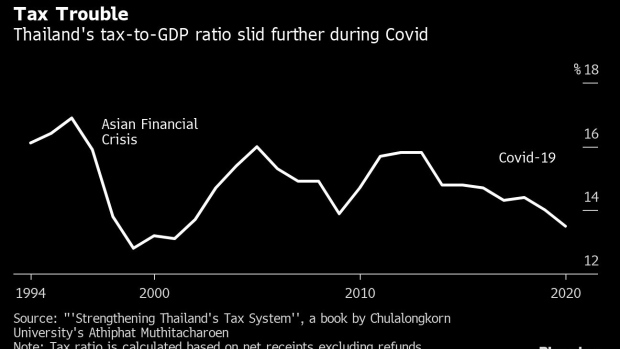 Figures for various Stock Exchange of Thailand (SET) indices are displayed on an electronic board at the bourse in Bangkok, Thailand, on Monday, Oct. 26, 2020. Thai equities, Asia's worst performers this year, will face another drag from the heightened political tension, which would derail the economic recovery amid the novel coronavirus pandemic, said Pakorn. Photographer: Taylor Weidman/Bloomberg , Bloomberg

(Bloomberg) -- Thailand is considering taxing stock trading for the first time in more than three decades, and making crypto traders part with a share of their profits, as the government hunts for revenue to fund billions of dollars in pandemic relief.

Prime Minister Prayuth Chan-Ocha’s government is expected to decide by end-January on the method and rate of taxing stock trading, as well as details on how to tax gains from trading digital assets including cryptocurrencies, according to Finance Minister Arkhom Termpittayapaisith.

Thailand is seeking new sources of revenue to finance Covid stimulus measures and cut reliance on borrowing as Southeast Asia’s second-largest economy continues to reel from the pandemic. Trading of stocks and digital assets has surged during the pandemic as investors chase higher returns amid record-low interest rates, opening up new tax avenues for the government.

“Due to the Covid-19 outbreak, general government revenue has been diverging from spending since 2020, and the impact appears to be permanent,” said Charnon Boonnuch, an economist at Nomura Holdings Inc. in Singapore. “This suggests that the government will likely look to expand its revenue sources further and beyond the proposed tax on digital assets and the recent e-commerce tax, to accommodate an upward shift in spending and provide a scope for more fiscal support to the still-weak economic outlook if needed.”

Below are tax proposals the government is mulling, according to local media:

Thailand’s tax revenue is lower than most other developing economies, limiting the government’s ability to boost spending to counter the economic slowdown. The country’s tax-to-GDP ratio was at 16.1% in 2019, compared to 18.4% for upper-middle income nations and 24.2% for high-income nations, said Athiphat Muthitacharoen, a lecturer at Chulalongkorn University and the author of “Strengthening Thailand’s Tax System.”

While many countries, including Indonesia, have raised their value-added tax in recent years to expand the revenue base and rein in budget deficits, Thailand cut its VAT rate to 7% from 10% in 1999 and has maintained it at that level ever since. Thailand also offers many tax rebates to lure investment and help businesses.

The finance minister has called for steps to broaden the tax base, but the prime minister has cautioned against levies that will discourage the adoption of innovative financial technology. The move to tax stocks and cryptocurrencies already has been opposed by the industry.

The revenue department is expediting discussions on the proposed crypto tax, and its decision will be fair to investors and other stakeholders, Director-General Ekniti Nitithanprapas said in statement on Jan. 10.

“Thailand hasn’t made any major moves on tax collection for decades and it will be difficult to raise any taxes ahead of the general elections,” Athiphat said. “Tax will become one of the key problems over the next five years.”