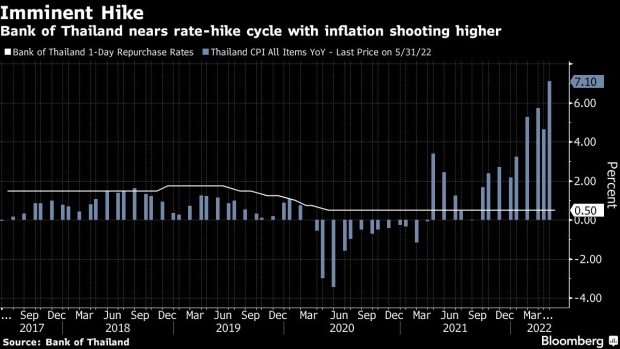 (Bloomberg) -- Thailand’s central bank should urgently hike interest rate to prevent a further spike in inflation and ease the burden on low-income groups already reeling from the rising cost of living, according to Korn Chatikavanij, a former finance minister.

The Bank of Thailand should convene an emergency meeting of its monetary-policy committee to lift its benchmark rate from a record low of 0.5% to close the gap with the US rates, said Korn, who was the nation’s finance minister for three years until 2011. Lowering the rate differential, the highest in the region, will help stem baht losses and limit the threat of imported inflation, he said.

The Thai policy committee left the key rate unchanged for a 16th straight meeting in a split decision early this month despite inflation at a 14-year high. But a 75 basis point hike by the US Federal Reserve last week and growing consensus for a similar magnitude increase next month would widen the yield spread if Thailand didn’t make a move, Korn said.

Korn said raising rates through an off-cycle meeting would be a “more psychological” move than a scientific one. “If the market believes you are serious about it and willing to take action, they will adjust” their inflation expectations, he said.

The Bank of Thailand may need to raise the rate by 50 basis points this year, or “even more aggressive than that,” depending on the Federal Reserve’s next move, Korn said.

BOT’s rate panel isn’t scheduled to meet until Aug. 10, and the central bank recently ruled out an emergency meeting, saying it will happen only under “exceptional circumstances” and if unexpected developments threaten its policy targets.

Headline inflation in Thailand has stayed well above the official target range this year, hitting 7.1% in May, the highest since 2008. BOT has raised its average CPI forecast for this year to 6.2%, citing higher fuel and food prices stemming from supply-chain disruptions caused by the Ukraine war.

“With inflation, it’s the low-income people who get hit the most, so you need to address inflation first as it impacts more people,” said Korn, who also combated high inflation as finance minister. “Cost-push inflation means it will be a lot harder to fight it later. You will be using stronger medicine than you might have to with obvious repercussion or collateral damage than you would like to see.”

Thailand, a net oil importer, is struggling to keep retail fuel prices in check after running up a bill of almost a $3 billion to subsidize diesel and cooking-gas prices. With the oil import value relative to gross domestic product at more than 10% for Southeast Asia’s second-largest economy, a weak currency will continue to fuel inflation, he said.

BOT Governor Sethaput Suthiwartnarueput has also argued that raising the policy rate earlier could avert steep increases down the road. Delaying monetary-policy normalization amid elevated inflation pressures may cause “greater costs” to Thai economy, according to minutes of the rate-panel meeting released on Wednesday.

Korn, who was the first to propose capping refinery margins of oil companies to keep retail prices down, said the government should legalize any move to collect a share of profit rather than just asking for voluntary cooperation for a limited period.

“The whole strategy of providing subsidies needs to be revised,” Korn said. “How can pump prices of fuel be the cheapest in Asean” if you are importing about 89% of your crude oil requirement, he said.