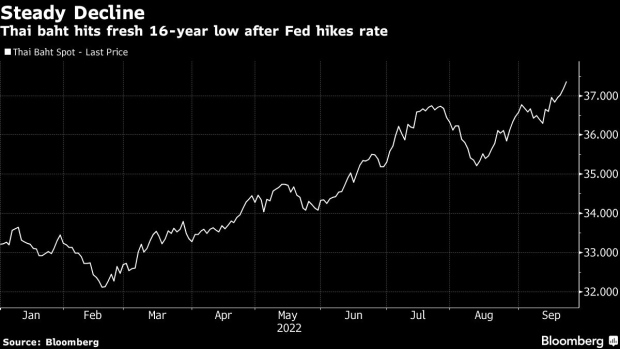 (Bloomberg) -- Thailand’s acting prime minister, who earlier this week called for measures to halt the baht’s slide, said the government won’t meddle with the central bank and how it handles the currency.

Prawit Wongsuwan, who is leading the government after a court last month suspended Prayuth Chan-Ocha, said on Thursday he directed Finance Minister Arkhom Termpittayapaisith to “only talk” to the Bank of Thailand about the baht’s recent slump.

That’s a walk back from remarks on Tuesday when he said he wants the baht back at 35 to a dollar. Arkhom, a technocrat-turned minister, said he asked central bank officials to closely monitor the currency and step in to curb any extreme volatility.

The finance chief, who has acknowledged that the central bank was in charge of the currency, didn’t issue any special directives at a meeting with BOT officials on Thursday, he told reporters. The monetary authority will need to balance the nation’s economic recovery, inflation and capital flows in its policy decision next week, he said.

The soft-pedaling exposes the policy conundrum in emerging markets such as Thailand which are struggling to sustain an economic recovery, amid the US dollar’s strength following the Federal Reserve’s resolve to lift interest rates further to fight inflation.

The baht fell as much as 0.8% to 37.452 to a dollar on Thursday, the lowest since October 2006. It has weakened almost 11% this year, with the losses coming mostly since the start of the war in Ukraine.

Bank of Thailand has repeatedly said it’s closely monitoring the baht and may take steps to curb excessive volatility, adding that dollar strength was hitting other currencies too. BOT is seen to raise rate by another 25 basis points when it meets next week, lifting the key rate to 1%.

While the plunging baht may not have much impact on Thailand’s businesses due to their low foreign debt, the cost of funds will increase with interest rates going up, said Sarath Ratanavadi, chief executive of Gulf Energy Development Pcl.

“The era of cheap borrowing costs will probably be gone for a long time,” said Sarath, who ranks as the second-richest Thai with a net worth to $12.4 billion. “We’ll have to prepare our business plan to deal time of high interest rates.”

(Updates with comments from finance minister from third paragraph.)