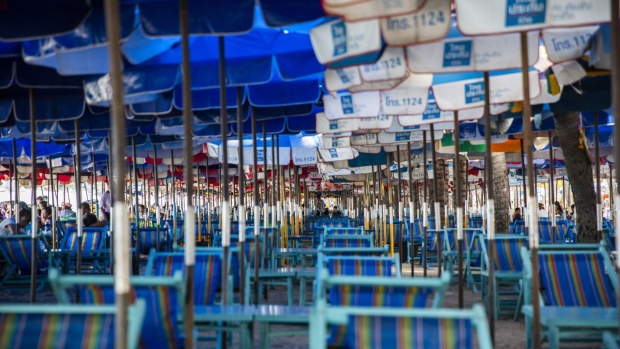 Visitors observe social distancing regulations while sitting on beach chairs under umbrellas at Bangsaen Beach in Chonburi, Thailand, on Sunday, June 14, 2020. Thailand said a number of countries, including China and Japan, are interested in discussions about travel bubbles, as the nation considers protocols for the eventual return of foreign tourists. Local tourism has already restarted. Photographer: Andre Malerba/Bloomberg , Bloomberg

Thailand is planning to reopen to long-term foreign visitors to help revive an ailing tourism sector and save millions of jobs.

A plan to be submitted to the government for approval and targeted to be finalized before the end of October seeks to allow visitors coming through its international airports provided they do a mandatory 14-day quarantine at the port of entry before being allowed to travel freely, according to Thosaporn Sirisumphand, secretary of the Center for Economic Situation Administration.

Thailand, one of the economies reliant on tourism, is facing its worst contraction this year. Its hospitality and tourism sectors are counting on the return of international visitors, who contributed up to two-thirds of tourism income before the pandemic, to reverse a slump in business and save up to 3.27 million jobs that Thailand Development Research Institute estimates are at risk.

The government and businesses are weighing the cost between curbing infections and limiting the damage to the economy, which is forecast to contract 8.5% this year. A plan to reopen the island province of Phuket to foreign tourists had been delayed.