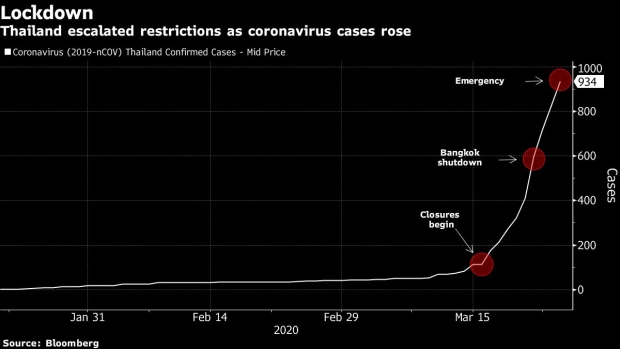 Thailand will become the latest country to go into a broad lockdown when a state of emergency is enforced from Thursday to fight the spread of the novel coronavirus.

The nation’s borders will be closed to foreign visitors, social gatherings will be banned, domestic travel restricted and all but essential shops shut until the end of April. The details were spelled out by the government Wednesday, a day after the planned emergency was announced.

“Thailand is at a turning point in the outbreak and the situation could get a lot worse,” Prime Minister Prayuth Chan-Ocha said in a televised speech in Bangkok. “It’s important that we impose stricter rules to reduce the spread.”

Describing the challenge as unprecedented, Prayuth said the state of emergency could be extended if needed. The central bank earlier underlined the economic damage from the disease known as Covid-19 when it predicted a 5.3% contraction for 2020.

Confirmed infections have surged toward 1,000 in March from the low 40s at the start of the month, and the death toll has climbed to four. Much of the country was already shut down before the state of emergency was declared.

No curfew has been implemented yet but one is possible, Deputy Prime Minister Wissanu Krea-Ngam said in a briefing, adding it could be a 24-hour prohibition with exceptions for essential activities like buying food.