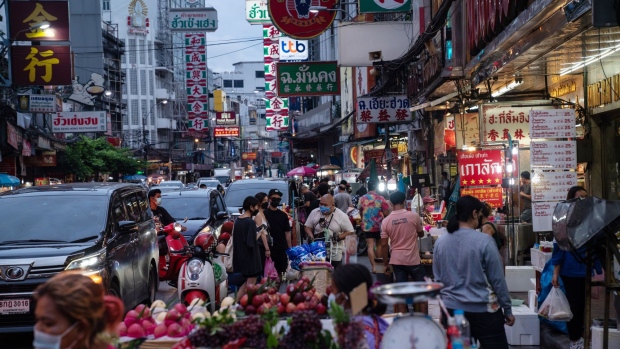 Shoppers and pedestrians on Yaowarat Road in the Chinatown area of Bangkok, Thailand, on Saturday, Aug. 28, 2021. Bangkok's Chinatown, founded at the same time as the Thai capital itself more than 200 years ago, is one of the largest anywhere and an important focal point for culture and trade. It is also rapidly changing. , Bloomberg

(Bloomberg) -- Thailand will raise its public debt ceiling to accommodate higher borrowing and spending to help support the economic recovery from the pandemic.

The limit on the debt-to-gross domestic product ratio will be increased to 70% from 60% to allow the government to borrow more if necessary, Finance Minister Arkhom Termpittayapaisith said after a meeting Monday in Bangkok of the nation’s fiscal and monetary policy committee, which is chaired by Prime Minister Prayuth Chan-Ocha. It wasn’t immediately clear when the new limit would go into effect.

As the pandemic grinds through its second year, with Southeast Asia suffering a brutal hit from the delta variant, government budgets are dwindling and monetary policy options are running low. Elsewhere in the region, neighboring Malaysia is aiming to raise its debt ceiling for the second time in a little over a year while the Philippines is nearing a key threshold.

Thailand has been reluctant to raise its limit for at least the past decade to burnish a reputation for fiscal discipline. But with the debt levels already inching closer to the legal threshold, debt managers will find it difficult to meet financing needs for the next fiscal year, which starts in October.

A higher cap will now allow the Thai government to move ahead with next year’s borrowing plan, estimated at 2.3 trillion baht ($69 billion) to fund the budget deficit, Covid relief spending and refinancing of existing debt.

As well, Prayuth, who recently survived his second no-confidence vote this year, is under pressure to add to the government’s current 1.5 trillion baht borrowing plan as Southeast Asia’s second-largest economy battles a wave of Covid-19 infections that began in April.

Bank of Thailand Governor Sethaput Suthiwartnarueput called last month for an additional 1 trillion baht in state spending to counter the pandemic, while business chambers have sought stimulus worth as much as 1.5 trillion baht and an increase in the debt ceiling to 80% to revive the tourism- and trade-reliant economy.

Thailand’s public debt-to-GDP ratio is expected to hit 58.9% by the end of September, according to the Finance Ministry. It stood at 55.6%, or 8.9 trillion baht, at end-July, official data showed.

The ratio is expected to rise steadily to 63.8% by end-2022 as Thailand will need fiscal measures to support the economy hit by the pandemic, Kasikornbank Pcl said in a research report last week.