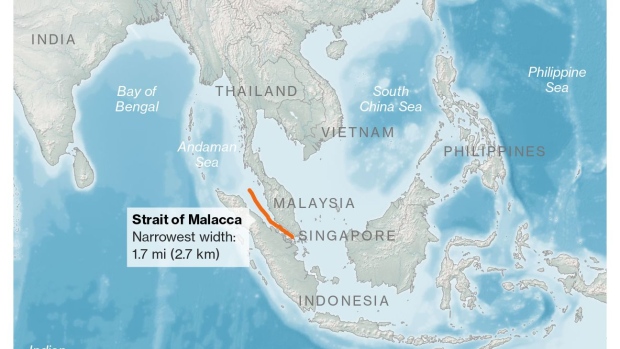 (Bloomberg) -- Trade-reliant Thailand plans to launch a national shipping company next year to bolster its trade capabilities, reduce transport costs and become a bigger player in global logistics as the Malacca bypass opens.

“With Covid, we’re facing container shortages, so a lot of our goods can’t be shipped and some products will perish. Losses are incalculable,” Transport Minister Saksayam Chidchob said in an interview. “The shipping line can increase security and support the country’s ambition to become a logistics hub.”

Thailand’s commercial vessels contribute to less than 10% of its international freight. The country earned 57.4 billion baht ($1.7 billion) from shipping in 2020, but it had to spend almost 10 times that.

A reliance on foreign vessels increases costs, hurts trade competitiveness and exacerbates disruptions in times of crisis, as seen now during the Covid-19 pandemic with global shipping beleaguered by delays and backlogs at ports.

Thailand had a state-owned maritime navigation company from 1940 to 2011, but the government won’t be reviving it. The new firm -- for now dubbed Thai National Shipping Line -- will instead be run as a private company to allow more flexibility, with the government owning 49% through the Port Authority of Thailand, Saksayam said.

The company will rent vessels and have units ranging from transport to maintenance, the minister said. Apart from minimizing reliance on foreign ships, goals include increasing tonnage to support trade growth and handling strategic goods and energy products to ensure economic and national security.

Its first services, expected in June 2022, will be domestic freight routes linking Bangkok and the highly-industrialized eastern coast to the southern region via the Gulf of Thailand, according to Saksayam. Regional and international routes will be added later and should benefit from the planned Strait of Malacca bypass that is expected to be completed as early as 2027.

The 300 billion baht passageway through the narrowest part of Thailand will link the Indian and Pacific Oceans and bypass one of the world’s busiest shipping lanes between Indonesia, Malaysia and Singapore. The project involves building seaports on the Gulf of Thailand and the Andaman Sea and linking them via a 90-kilometer highway and railway.

It will become the shortest route linking the Asia Pacific region with India and the Middle East, cutting shipping time by more than two days. The so-called Land Bridge will also serve as one of the national shipping line’s hubs for logistics, said Saksayam, who expects 20% of traffic to divert to the new Thai route when it opens.

The shipping company and the Malacca bypass are expected to boost Thailand’s exports, which expanded 16.2% in the first seven months from a year earlier, helped by a weakening baht and growing global demand for products such as cars and rubber. Exports have been a rare bright spot for the Thai economy, with tourism and consumption hit by Covid outbreaks and travel restrictions.