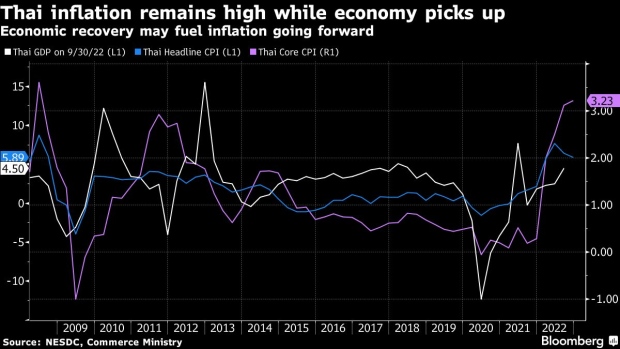 Bank of Thailand will raise the one-day repurchase rate by 25 basis points to 1.50% on Wednesday, according to 19 of 20 economists surveyed by Bloomberg. One analyst expects the central bank to hold the rate to cool a currency that has risen 17% since slumping to a 16-year low in October.

Thai policymakers, who have lagged peers in the current tightening cycle, are expected to sustain their “gradual and measured” rate moves amid elevated price gains that may be spurred by the influx of travelers from China’s reopening. Unlike neighbors that already paused or signaled that they’re at the tail end of rate hikes, Thailand may carry on with a few more increases.

While Thailand’s headline inflation is off the peak, the core gauge remains the fastest since 2008. Although a rising baht helps damp imported prices, exporters complaining about the currency’s rally hurting competitiveness could complicate BOT’s decision. A group of Thai shippers asked the central bank on Tuesday to delay further rate increases.

Here’s what to watch out for in BOT’S statement at 2 p.m. local time:

The central bank will probably upgrade its tourism forecast this year from the 22 million visitors projected in November. The government has already lifted its outlook to 25 million after China’s announcement of its reopening.

About 28% of Thailand’s 40 million annual visitors before the pandemic were from China. Tourism accounts for at least 12% of Southeast Asia’s second-largest economy and a fifth of jobs while private consumption makes up 50% of GDP.

The ‘Land of Smiles’ received 11.2 million overseas travelers in 2022, surpassing the government’s 10 million estimate. China’s approval for tour groups to travel to some countries including Thailand starting next month will be another boost.

Economic momentum remains strong and the outlook firm, providing scope for the BOT to continue paring monetary stimulus. Headline inflation should steadily slow due to more favorable base effects for fuel and food prices. Even so, at 5.9% in December it remains well above the BOT’s 1%-3% target, threatening to dislodge inflation expectations.

The baht is the best performer among 12 Asian currencies tracked by Bloomberg so far this year, unnerving exporters and manufacturers.

Weakening exports, which make up more than half of Thailand’s output, are the dark clouds that loom in the horizon. Overseas shipments fell 14.6% in December, a third straight month of contraction.

“A surprise rate pause would go a long way in assisting these efforts to slow the baht’s gains,” said Pantheon Macroeconomics’s Miguel Chanco, who forecasts a rate hold.

Yet analysts from Goldman Sachs Group and Australia & New Zealand Banking Group believe that BOT may make a few more hikes. BOT will increase in quarter-point increments until the rate reaches 2.5% by the third quarter, Goldman said.

“We see scope for four 25 basis-point rate hikes this year, which will take the terminal policy rate to 2.25%,” said ANZ’s Krystal Tan.