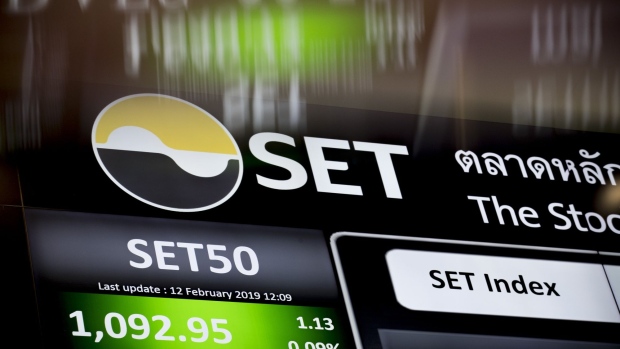 The SET50 Index figure is displayed on an electronic stock board at the Stock Exchange of Thailand (SET) in Bangkok, Thailand, on Tuesday, Feb. 12, 2019. Uncertainty surrounding the Thailand's national elections will have an impact on equities, according to Nader Naeimi, head of dynamic markets at AMP Capital Investors Ltd. Photographer: Brent Lewin/Bloomberg , Bloomberg

(Bloomberg) -- Thailand will levy a tax on stock transactions for the first time in more than 30 years as the Southeast Asian nation taps new revenue streams to fund post-pandemic recovery measures.

A levy of 0.05% will be imposed on stock trading next year, before it’s raised to 0.1%, according to a finance ministry statement. Some investors such as market-makers and pension funds will be exempted from the tax, the ministry said.

The transaction tax was approved by the cabinet on Tuesday and will come into effect 90 days after it’s notified in the Royal Gazette. The country had waived the tax in January 1992 to help promote equity trading.

The value of average daily stock trading in Southeast Asia’s second-biggest economy has surged about tenfold to 80 billion baht ($2.3 billion) in the past three decades as more retail investors turned to the market for better returns amid low interest rate on bank deposits during the pandemic-triggered economic downturn.

The market capitalization of about 660 companies listed on the bourse has swelled to about 19.4 trillion baht, about 22 times three decades ago, according to the finance ministry.

Finance Minister Arkhom Termpittayapaisith said retail investors may be less impacted than large investors and the tax proposal may be scrutinized by the Council of State before being notified in the gazette.

The government expects to net about 8 billion baht from the stock tax in the first year, which may double to 16 billion baht a year when the levy is doubled.