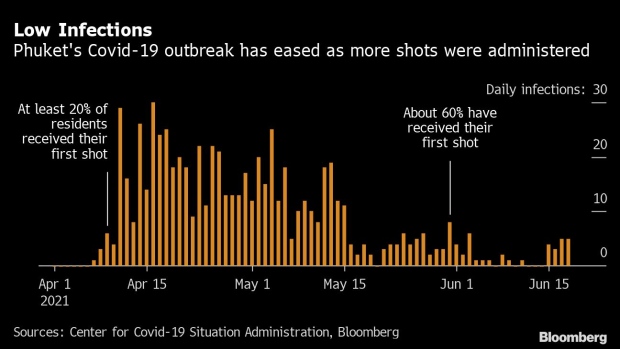 PHUKET, THAILAND - APRIL 21: A tour boat operator waits for customers, while a group of teenagers fish from the beach on April 21, 2021 in Phuket, Thailand. Thailand's tourism-driven economy has been battered by the country's borders being closed for a prolonged period, and a recent rise in Covid-19 cases has caused further concern as the government imposed fresh restrictions to control the outbreak. (Photo by Sirachai Arunrugstichai/Getty Images) , Photographer: Sirachai Arunrugstichai/Getty Images AsiaPac

Thailand has finalized its plan to reopen Phuket on July 1, the so-called Phuket Sandbox, which will allow fully vaccinated tourists to visit the island without having to quarantine.

It’s the first time in more than a year that foreign visitors would be able to travel to Thailand’s most-famous resort-destination without being subjected to 14 days of hotel isolation, provided they are inoculated against Covid-19 and aren’t coming from what the government deemed “high-risk” nations.

Tourism-reliant Thailand is gearing up for a nationwide reopening as early as October to revive its economy, and is using Phuket as a pilot project while the rest of the country accelerates inoculations. The vaccination rate for Phuket residents is currently about 60%, compared to only about 5% nationwide; the government’s goal is 70% on the island before the reopening.

There were few visitors to Thailand last year, and a special visa program initiated ahead of the peak season over the Northern Hemisphere winter did little to boost numbers. In the year before the pandemic, international arrivals averaged more than 3 million per month and the tourism industry contributed about a fifth of gross domestic product.

The Phuket Sandbox is expected to get the Cabinet’s rubber stamp on Tuesday, with Prime Minister Prayuth Chan-Ocha planning a visit next week. Prayuth said this week that Thailand “must be ready to live with some risk” and “let people go back to being able to earn a living.”

Key details for the plan: