(Bloomberg Opinion) -- If someone woke from a coma and saw that the S&P 500 Index was up 21 per cent for the year and reaching a new record high on Monday, the immediate reaction would most likely be that everything is great. But that’s far from true.

The list of reasons stocks should be down is much longer than the one for why they should be up. The economy has slowed, and a majority of chief financial officers anticipate a recession within a year. Earnings have stopped growing, and estimates are being cut. Stock valuations are high. The U.S.-China trade war has not been resolved. Congress has started an impeachment inquiry against President Donald Trump. On the other hand, the Federal Reserve is easing monetary policy, but that’s only because the outlook has deteriorated.

So why are equities roaring ahead? The answer comes down to a handful of stocks: Apple Inc., Microsoft Corp., Visa Inc., MasterCard Inc. and Oracle Corp. Those five companies account for half of the S&P 500 tech sector, which has surged 30.2 per cent for the year. Exclude that sector and the S&P 500 would be up only about 14 per cent, according to DataTrek Research. That’s still good but nothing special when compared with the returns in the rest of the world, with the MSCI All-Country World Index excluding the U.S. having gained 12 per cent.

Therein lies the hidden risk embedded in the market, which is that any missteps by any of these highfliers could spell doom for equities more broadly. It also underscores just how lacking in breadth this latest leg up has been. For one, the percentage of stocks on the New York Stock Exchange closing above their 200-day moving averages has dropped to 53 per cent from 59 per cent in mid-September.

Not only that, but the spread between the share of S&P 500 members closing at 52-week highs and the share at 52-week lows has been in a general downtrend since June.

To be sure, it’s not unusual that a handful of stocks have led the broader market higher. Before this year, it was the FAANG group of stocks: Facebook Inc., Apple, Amazon.com Inc., Netflix Inc., Google parent Alphabet Inc. and a few others. A few years ago, AQR Capital Management’s co-founder and chief investment officer, Clifford Asness, published a paper examining the impact of individual stocks on the S&P 500 from 1994 to 2014. What he found was that while the S&P 500 rose 9.3 per cent a year, the top 10 stocks accounted for 4.1 percentage points of that gain on average. 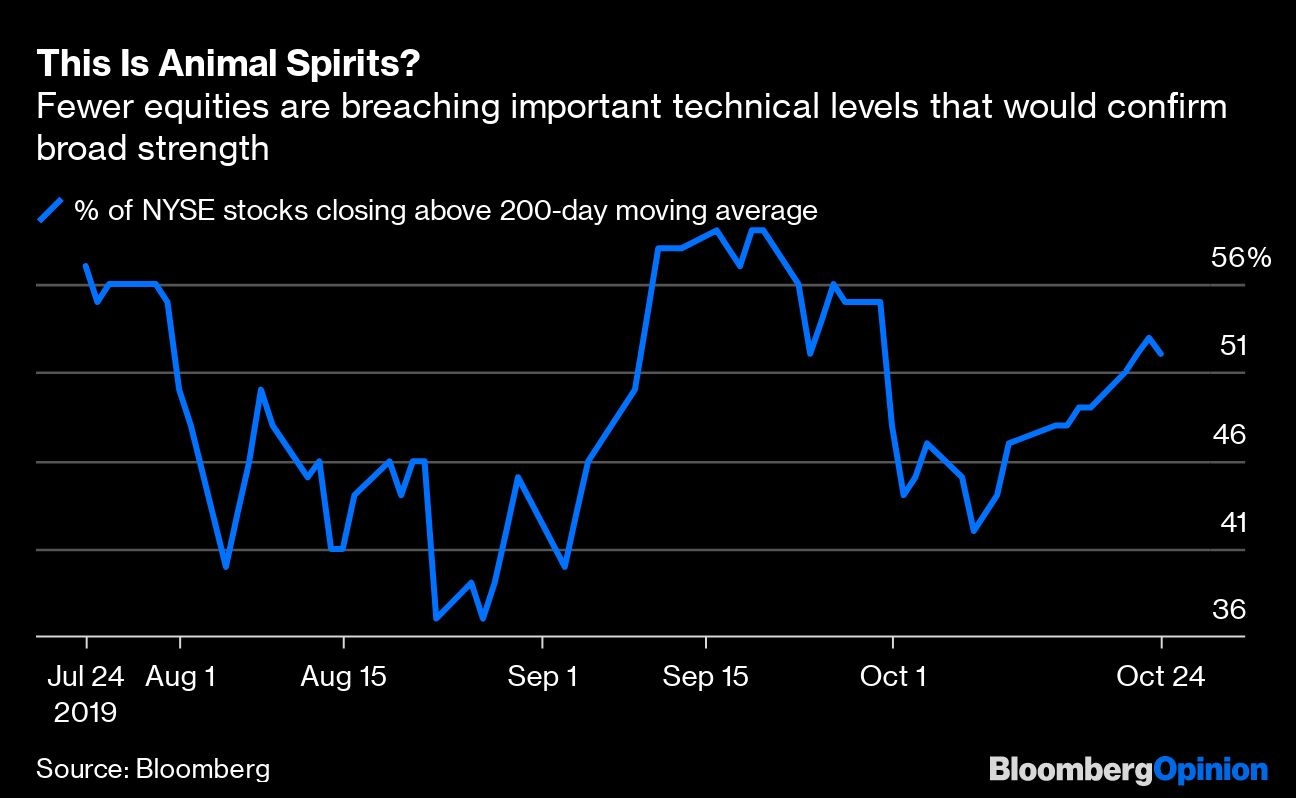 Then there’s the awkward fact that smaller stocks that make up the vast majority of the market are down about 11 per cent from their records reached in August 2018 based on the S&P Small Cap 600 and Russell 2000 indexes.

This stock market has delivered plenty of surprises, and betting against it has been a losing proposition. In January, when the S&P 500 was trading at about 2,600, the median estimate of about 25 Wall Street strategist surveyed by Bloomberg was for it to end the year at 2,913. It surpassed that level in April and ended Friday at 3,203. But those same strategists are more cautious, predicting the benchmark to drop to 3,000 by the end of the year.

Of course, they could raise their forecasts, but that would be awkward given the trend in profits and the slowing economy. Third-quarter earnings are tracking at a three oer cent decline from a year earlier, and forecasts for the fourth quarter have been cut to a gain of 1.2 per cent from the 5.4 per cent increase that was forecast at the end of July, according to Cantor Fitzgerald. The S&P 500’s price-to-earnings ratio, at just shy of 20 times, is the highest since last October, just as the benchmark was beginning a tumble that led to a 14 per cent drop in the final three months of the year.

All that suggests investors need to look beyond the headlines about yet another record.