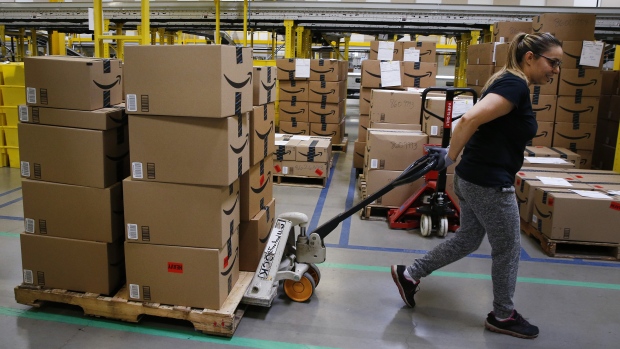 An employee pulls a cart stacked with boxes at the Amazon.com fulfillment centre in Kenosha, Wisconsin, Aug. 1, 2017 , Bloomberg/Jim Young

While China slams the brakes on buying trophy properties and the retail apocalypse draws nigh, something less sexy but striking is going on in real estate.

Warehouses are now worth more than office buildings.

Giant, high-tech warehouses, to be precise. These “big box” affairs are defined as having at least 200,000 square feet (18,600 square meters) and 28-foot (8.5-meter) ceilings, in a report by Colliers International Group Inc. that calls out the surge in their value.

Colliers looked at 14 North American markets (all but one, Toronto, are in the U.S.) and found that such warehouses sold last year at an average capitalization rate of 5.8 per cent. That’s comfortably lower than the 6.7 per cent cap rate for U.S. office space, including suburban and rural properties, and neck and neck with offices in central business districts, at 5.7 per cent. Cap rates, which measure yield, fall as asset values rise.

These are not the sleepy warehouses of old. Distribution centres today are hives of activity. As e-commerce companies race to get that Original EggMazing Easter Egg Decorator Kit to your doorstep ever faster, they need sophisticated equipment to assemble orders and a swelling workforce to manage it all.

The report itself didn’t look at office properties, and markets dominated by offices aren’t always the same as major industrial markets. Still, the rise of the warehouse’s value is unmistakable nationwide, said Pete Quinn, national director of industrial services for the U.S. at Colliers. Vacancy rates are at “historic lows,” Quinn said, and despite a lot of construction, warehouses are being leased as soon as the cranes come down. Indianapolis, Phoenix and California’s Inland Empire are among the hot markets.

Amazon.com Inc. (AMZN.O), naturally, is the top occupier of industrial space in the U.S., with 102 million square feet spread over 258 facilities and plans to add 37.8 million more square feet by the end of the year, Quinn said. Amazon’s competitors, including those that started out with traditional physical stores, such as Kohl’s Corp. (KSS.N), are modernizing their own supply chains to keep up, he said, adding to the demand.