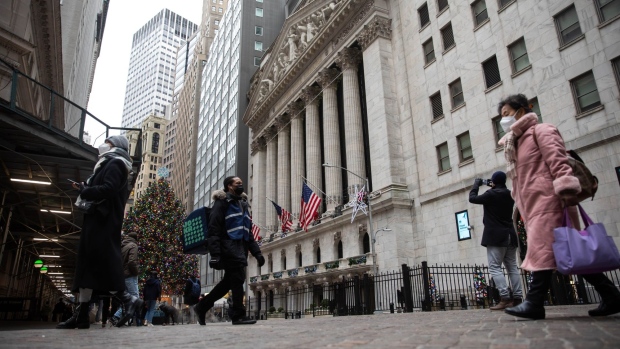 The New York Stock Exchange (NYSE) in New York, U.S., on Monday, Jan. 3, 2022. As 2022 begins, the overriding message from almost 50 financial institutions across Wall Street and beyond is that conditions still look good, but the rip-roaring rallies powered by the reopening are history. Photographer: Michael Nagle/Bloomberg , Bloomberg

OPINION -- Wall Street has an unfortunate habit of pushing financial innovations to such extremes that they break. This is essentially the problem facing special purpose acquisition companies: They’ve oversaturated the market and are now dysfunctional.

Blank-check firms raised more than US$160 billion on U.S. exchanges in 2021, about double what they raised the prior year, according to Bloomberg data. Almost 600 SPACs are now searching for an acquisition, with another 250 or so indicating they plan to list shares. That’s more than enough for a fragile equities market to digest.

Businesses that merged with these cash-shells have been among those worst affected by the sell-off in the frothiest corners of the stock market. SPAC shareholders have all but given up funding proposed mergers. Some announced deals are being abandoned prior to completion.

Rather than persist in minting yet more blank-check companies, SPAC founders must reassess the type of companies they are taking public. If the current fashion for value over growth stocks persists, SPACs might do better — shock! — by merging with firms that actually make money.

SPACs that completed deals last year have, on average, fallen 34 per cent against the basic US$10 a share price at which they sell units to investors and at which transactions are agreed upon. Some have done far worse: Shares of deep sea mining company, TMC the metals co. Inc., have shed 85 per cent. Chamath Palihapitiya-backed Clover Health Investments Corp. has declined more than 70 per cent.

It’s no wonder many SPAC shareholders are demanding their money back instead of funding mergers. This redemption rate exceeded
60 per cent in December, according to data from SPAC Research that I’ve analyzed. So far in January, the average is almost 90 per cent. It’s counterproductive and costly to raise huge gobs of money only to hand most of it back again (not that the banks who get paid for handling the transactions are complaining). SPAC founders are forced to seek additional financing, such as convertible debt, to ensure the deal provides sufficient cash.

Due to heightened regulatory scrutiny, SPAC mergers are also taking many months to reach the finish line — and the frustration of deal participants is starting to show. Though cancelations are still a small proportion of the total, more than a dozen business combinations were abandoned in 2021. This week, finance app Acorns Grow Inc. cancelled a US$2.2 billion transaction with Pioneer Merger Corp.

While new issuance has slowed compared to the frantic pace at the start of 2021, some sponsors continue to mint new SPACs as if everything was hunky dory. There were more than 50 such listings in December and, so far, almost 20 in January.

It’s extremely rare for a SPAC to quit and simply liquidate: Sponsors would lose their free founder shares and the money they’ve personally invested. Most prefer to seek a time- extension on the typical two-year limit to close a deal, rather than dissolve the enterprise.

The market won’t become healthier until investors are offered more reasonably priced deals. That’s especially difficult right now because private startup valuations have become so inflated due to all the venture capital money that’s poured in. Acorns Grow said it expected to get a better valuation in private markets and would then pursue a regular IPO.

All this may require SPACs to reevaluate the types of companies they pursue. In 2021, they tended to court neophyte technology firms, such as those building flying taxis, space equipment and electric vehicles. Some of these won’t generate revenue (never mind profits) for years. Today’s stock market might be more receptive to combinations with companies that already make money. “Before 2020, mature-business private equity deals were a more likely path to success,” notes Benjamin Kwasnick, founder of SPAC Research.

While that adjustment takes place, the last thing the market needs is even more SPACs chasing deals. So please, Wall Street, let’s take a breather.

This return doesn’t include the value of SPAC warrants investors receive for seeding SPACs. Losses may be higher if investors acquired the shares at a premium to the merger value. Again, compared to the US$10 a share deal price