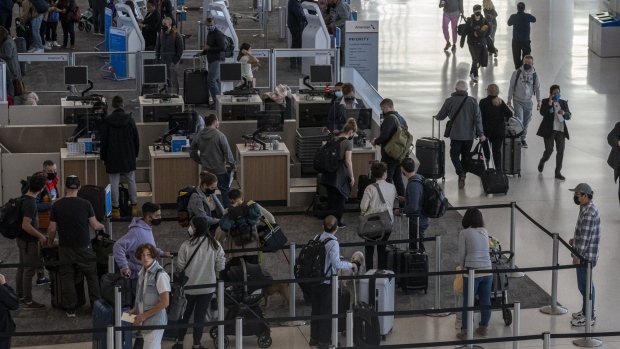 (Bloomberg) -- Arrive at the airport early — the Thanksgiving travel rush is back. More people are traveling through US airports in the pre-holiday period than in 2019, according to the TSA.

On Tuesday, 2,299,346 people were screened in security in American airports versus 1,968,137 passengers on the comparable day in 2019.  Monday’s travel figures were higher as well, and the Sunday after Thanksgiving is expected to be even busier.

United Airlines anticipates Sunday the 27th to be its biggest day since before the pandemic, with more than 460,000 passengers flying back from their Thanksgiving celebrations, with Denver, Chicago O’Hare, Houston Intercontinental and Newark being the busiest airports. The airline has added 275 extra flights to meet peak demand on Sunday.

The roads will be busy too. AAA says 2022 will be the third-busiest Thanksgiving travel year since 2000. If you’re looking to avoid traffic, the roads are expected to be the most congested between 11 a.m. and 8 p.m. on Wednesday.

Inflation is replacing Covid as the biggest disruptor to holiday travel, as fliers heading home will have likely paid more for their tickets than in recent years. Domestic fares are 10% higher than 2021, with an average round-trip price $275, according to data from search-engine Hopper. Travelers packing their passports and heading abroad for Thanksgiving are paying 16% more than last year and 24% over 2019 prices, with round-trip fares averaging around $828. The Thanksgiving dinner they’re heading home for will cost 20% more too, as stuffing is breaking the bank.

• Read More: it may be impossible to avoid the crowds, but there are ways to snag deals for Christmas and New Years.