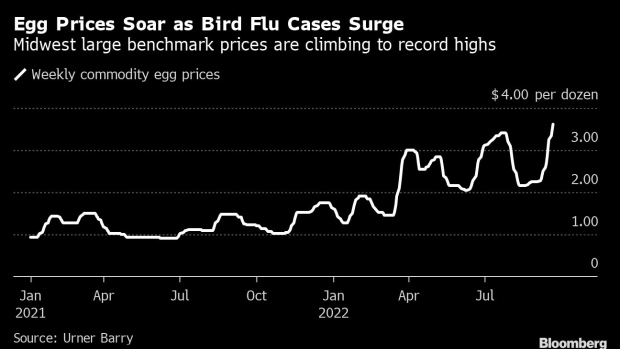 Turkeys on a farm in Orefield, Pennsylvania, U.S., on Wednesday, Nov. 10, 2021. Nearly every component of the traditional American Thanksgiving dinner, from the disposable aluminum turkey roasting pan to the coffee and pie, will cost more this year, according to agricultural economists, farmers and grocery executives, The New York Times reports. , Bloomberg

(Bloomberg) -- Turkeys are selling for record high prices ahead of the Thanksgiving holiday as a resurgence of bird flu wipes out supplies across the US.

Avian influenza is devastating egg and turkey operations in the heartland of the country. If just one bird gets it, the entire flock is culled in order to stop the spread. Millions of hens and turkeys have been killed in recent weeks. As a result, prices for turkey hens are nearly 30% higher than a year ago and 80% above pre-pandemic costs. Just as concerning are inventories of whole turkeys, which are the lowest going into the US winter holiday season since 2006. That means there will be little relief from inflation for Thanksgiving dinner.

“There’s nothing appearing on the horizon to suggest anything new is going to surface to help ease the supply-side pain for Thanksgiving turkeys,” said Russ Whitman, senior vice president at commodity researcher Urner Barry. The new bird flu cases “are troubling and involve turkey meat birds, which will without doubt firm up an already firm scenario,” namely that there may be shortfalls during the holidays.

The virus’s comeback is a surprise because there was already a major avian influenza outbreak in the first half of the year that killed over 40 million birds. The disease doesn’t usually return, as the heat of summer kills it off. The current outbreak, which brings death totals to over 45 million, is likely to only get worse as wild birds begin to fly south, said Beth Thompson, South Dakota’s state veterinarian. Bird flu is propagated by migrating wild birds that swarm above farms and leave droppings that get tracked into poultry houses.

This year’s avian influenza “doesn’t seem to have been affected by that hot summer, and in the next probably four to six weeks, we’re going to see those migrating birds coming back from Canada, flying over the United States,” she said. “That may increase the viral load that’s out in the environment.”

While a 2015 outbreak is considered the biggest in history, this year’s virus has delivered a far bigger shock as rampant, across-the-board inflation is already straining consumers’ budgets.

Turkey hens are $1.82 a pound this week, according to Urner Barry, compared to $1.42 last year and $1.01 before the pandemic. Meanwhile, wholesale egg prices are at $3.62 a dozen as of Wednesday, the highest ever, up from a previous record of $3.45 a dozen set earlier this year, said John Brunnquell, chief executive officer of Egg Innovations, one of the biggest US producers of free-range eggs. Consumers have seen prices for eggs at grocery stores triple this year, while turkey meat rose a record-setting 60%, according to a Cobank report.

Consumers should still find holiday sales, with turkey a so-called loss-leader that lures shoppers to buy other products. “Discounted turkeys are one of those holiday deals that bring people into the grocery store,’’ Beth Breeding, vice president of communications and marketing at the National Turkey Federation, said by phone.

The unseasonable return of bird flu is raising concern that such outbreaks will become more common. That could mean persistently higher prices for eggs and turkey. The economic costs are formidable, too. The last major outbreak in 2015 cost  $3.3 billion dollars to recover from. That number has already been eclipsed by this year’s outbreak, Cobank said. With factors such as high labor and feed costs, it will take longer for their flocks to rebound, causing prices to remain high, according to the report.

“We could possibly be entering a new phase where it’s endemic like it is in Europe,” Brunnquell said. “This may be a new norm because there are so many wild birds that are carriers. … We could be entering a new world of the poultry industry.”

For small farmers, just one case of bird flu can entirely wipe out an operation. Thisteldown Farms in Hicksville, Ohio, raises 2,000 organic chickens a year and sells them directly to families in the area. A nearby poultry producer in the northwest Ohio area was forced to cull three million chickens this month.

“It’s terrifying to think that this could start with a random bird, and next thing you know, you’ve got millions of your own birds that have to be cleaned out,” said James Jacobs, the farm’s owner. “If [my chickens] got the bird flu, it would wipe out my entire operation. Absolutely.”