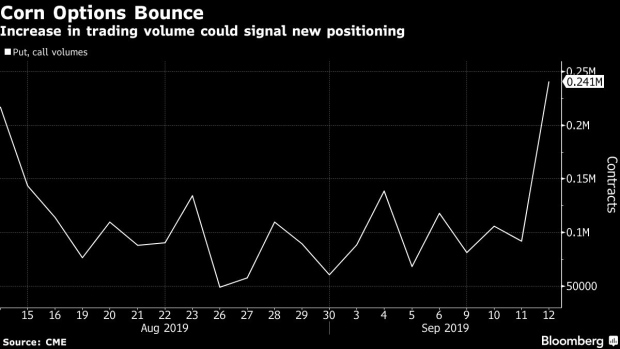 China is encouraging companies to buy U.S. farm products, and will exclude them from added tariffs. Many crop prices are heading for their best week since at least June on optimism that Beijing and Washington are inching toward a deal. The year-long trade spat has undercut farmer profits and boosted debt levels in the U.S. as Chinese demand fell off.

The trade news helped grain markets shrug off a report from the U.S. Department of Agriculture on Thursday that showed bigger yields than analysts had forecast. Even after the bearish supply news, corn, soybeans and wheat all closed higher. That’s a signal to many market watchers that prices may have found a near-term floor.

Traders holding short wagers “got all they could’ve hoped for in yesterday’s report,” Jacob Christy, a trader at The Andersons Inc., said in a video posted online. “It feels like we’re about to enter a re-balancing period.”

Prices could start to post “some further gains in the interim, and at the very least, the markets probably scored their interim lows for now,” he said.

Corn futures jumped 1.1% to $3.7125 a bushel Friday morning, on pace for a weekly gain of 4.4%, which would be the most since June 14. Volumes in the option market have also climbed this week, another sign that traders could be changing their positioning.

Over the last week, the U.S. and China have taken multiple small steps to ease trade tensions. If the sides reach a deal, it would be a huge relief for American farmers who have also been struggling with extreme weather that has hampered their efforts.

In the meantime, some market watchers have also expressed skepticism over the USDA’s rosy picture for American crops. Many traders are expecting that the agency will be forced to make reductions in its yield forecasts, especially for soybeans, Christy said.

“As for today, we’ll see if the short-covering rally can be extended as we finish what’s been some pretty good reversal weeks for both corn and beans,” he said.

To contact the reporter on this story: Millie Munshi in Denver at mmunshi@bloomberg.net

To contact the editors responsible for this story: James Attwood at jattwood3@bloomberg.net, Reg Gale, Will Wade