Even for this Gilded Age of 0.0001 per centers, Kenneth Griffin drips money.

The hedge-fund mogul recently closed on a New York penthouse for an eye-watering US$240 million. Before that he picked up a US$122 million London mansion. He can hang his US$200 million Pollock in one and his US$300 million de Kooning in the other.

Remarkably, all of that cost less than what Griffin made in 2018, when his personal fortune swelled by US$870 million to about US$10 billion, according to the Bloomberg Billionaires Index, a ranking of the world’s 500 richest people.More remarkable is how Griffin and many other hedge fund giants mint so much money: with investment returns that are solid, but a far cry from John Paulson’s mammoth housing short or when George Soros broke the Bank of England.

The Bloomberg Billionaires Index’s inaugural ranking of hedge-fund wealth lays bare a truth about the business that, for many, defines what it means to be rich.

Outfits like Griffin’s Citadel and Ray Dalio’s Bridgewater Associates have grown so big by assets that they’ve effectively become printing presses for their ultra-rich owners. These funds now throw off millions or billions of dollars a year in management fees. 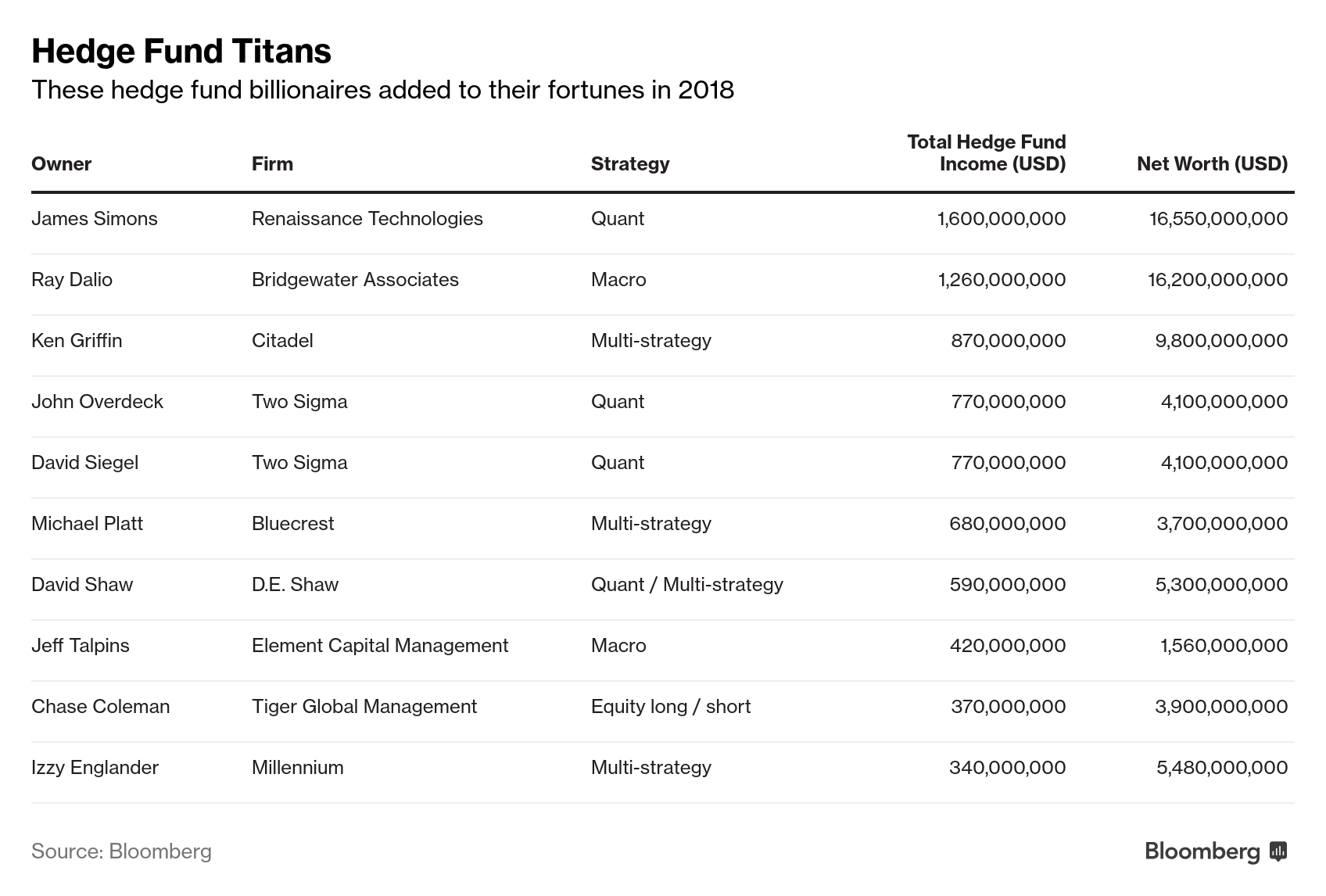 “We still want the mega funds to produce returns that are better than a typical hedge fund, that’s why we’re willing to pay the 2 and 20 per cent fees,” said Tim Ng, CIO of Clearbrook Global Advisors, which invests in hedge funds. “We’re willing to tolerate lower performance from some in a market like 2018 because they have for years outperformed their peers.”

Bloomberg reached out to representatives for all of the firms and individuals on the list. All declined comment.

The top hedge-fund earners of 2018 performed significantly better than the average manager.

Quants feature heavily on Bloomberg’s list, led by James Simons of Renaissance Technologies. The former code-breaker’s fortune increased US$1.6 billion to US$16.6 billion, according to Bloomberg estimates, making him the world’s wealthiest hedge fund manager.

RenTech’s Institutional Equities Fund gained 8.5 per cent, while its Medallion vehicle, closed to outside investors, did better.

He’s now worth about US$16.2 billion. His flagship Pure Alpha fund gained 14.6 per cent last year, while the All Weather strategy lost money.

Some managers crushed the competition.

Michael Platt of Bluecrest Capital Management returned 25 per cent, although hedge fund investors didn’t benefit after he kicked out clients. Jeff Talpins of Element Capital Management had a 17 per cent gain for his macro fund, elevating him to billionairedom.

For several people on the list, hedge funds are just a component of their businesses.

Griffin owns one of the world’s largest firms making markets in stocks and bonds. In addition to buying houses and art, he’s given away more than US$700 million to charity. 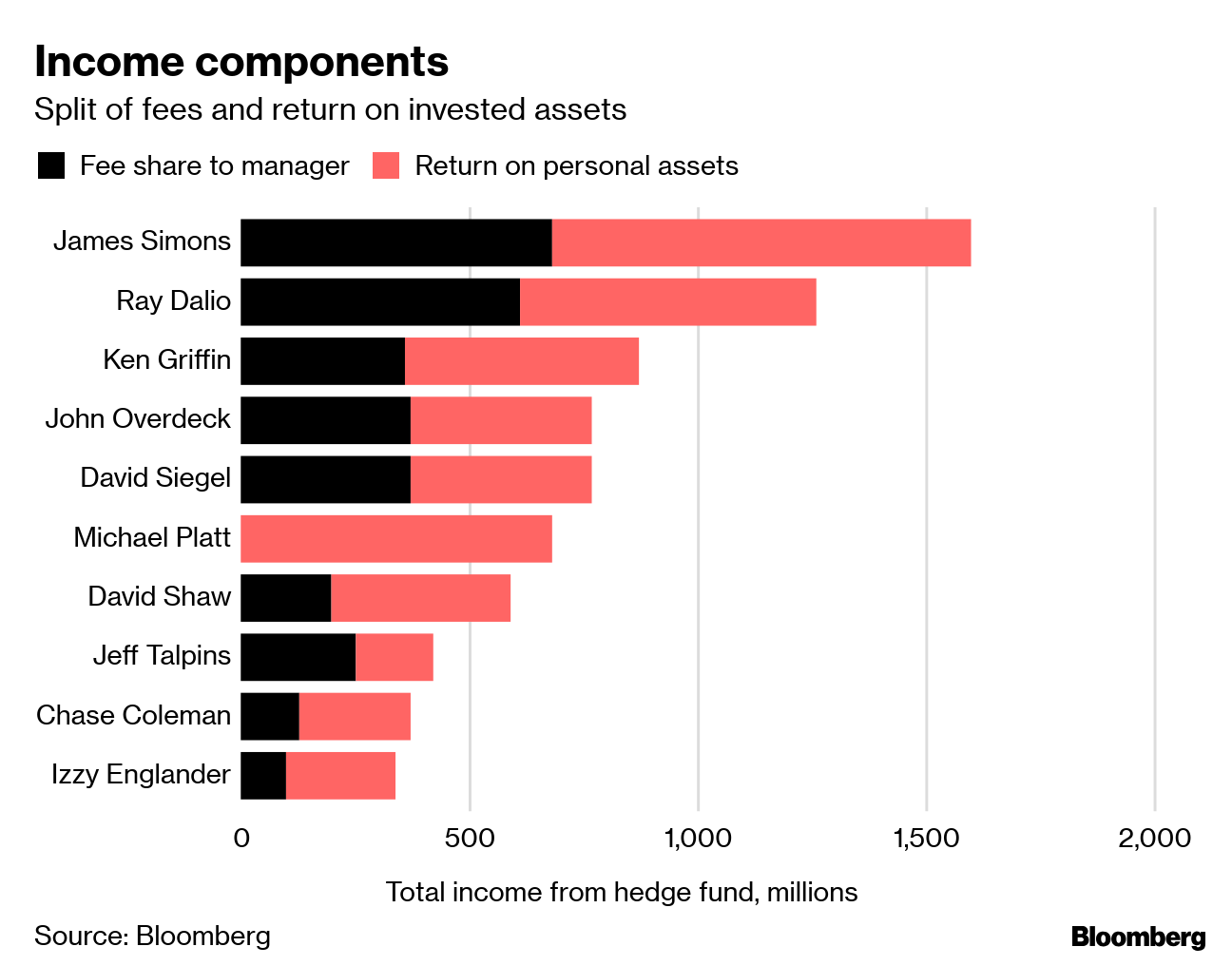 The figures are more than almost anyone will earn in a lifetime, but 2018 wasn’t a particularly good year for the industry. Closures outnumbered launches in 2018 for the third year in a row, according to Eurekahedge, and investors continue to pressure managers to cut their fees.

To compile the ranking, Bloomberg broke out “total income” figures to show estimates of dividend income and return on personal assets. Dividend income is our calculation of the share of performance fees that the manager takes home as owner of the hedge fund. Return on personal assets is our estimate of how much managers earned on their own cash invested in their funds.