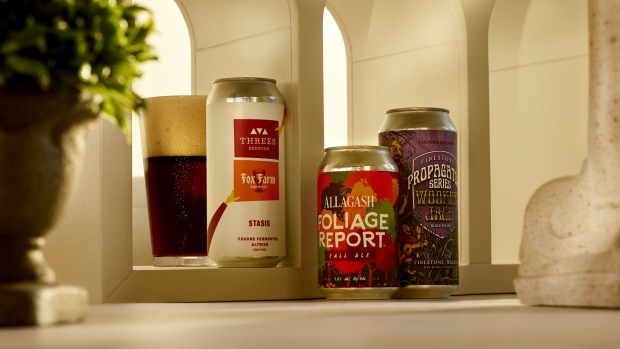 (Bloomberg) -- As much as I’d hoped 2021 would be a fresh start, we all know how that panned out. While some of my beer colleagues resumed international travel and partied like it was 2019, I did an admittedly crummy job of getting out of the five boroughs. I made it to just a smattering of beer events—a couple of festivals, a few tastings, a handful of new breweries and bars—so mostly I sampled new beers at home, at friends’ small gatherings, or outdoor events.

I wasn’t the only one: Recent statistics from the Brewers Association illustrate the industry’s struggles. Overall beer sales were down 2.3% in 2020, while craft beer sales fell more than 9%. Retail dollar sales of craft beer decreased by a whopping 22%, the primary reason being a shift from tasting rooms, bars, and restaurants to retail packaged sales.

This probably accounts for some glaring omissions in my 2021 list. (See 2020 and 2019.) No Pacific Northwest breweries are here because, well, many of those beers stay local and don’t make it to the East Coast, though I have no doubt that the region continues to be a craft beer powerhouse.

While many of these sales issues may ameliorate in the coming year, problems will linger along the supply chain. Cans, the currently favored format of craft consumers, are harder and harder to come by, and accessing raw ingredients involves some of the same shortages facing most industries. One of the scariest concerns for 2022 is obtaining barley, the primary grain used to brew beer. The American Malting Barley Association reported that overall barley production in the U.S. for 2021 was down more than 30%, to 2.6 million tons, from the 2020 total of 3.7 million tons. Bart Watson, chief economist for the Brewers Association, adds: “Quality issues may be the big story of 2022.”

That’s not to say it’s all doom and gloom. Tight margins can breed creativity and, as with the honorable mention below, looking inward can mean moving the industry forward in a more healthy way. These are my favorite 15 beers of the year.

Ask anyone in the beer industry what their favorite spot in Denver is—an area with nearly 150 breweries—and Bierstadt Lagerhaus is the likely answer. Co-founders and headbrewers Ashleigh Carter and Bill Eye are known their pillowy Slow Pour pilsner, along with a smattering of other perfectly crafted, German-style lagers. For All the Hype, they recruited Khris Johnson of Florida’s Green Bench Brewing to lend a guiding hand. Although brewed with 100% beechwood smoked malt, the flavor is gentle with a clean, crisp finish. The tongue-in-cheek name is a taunting acknowledgement that smoked lagers are one of the least sexy—and poorest selling—beer styles.

Atlanta-based Halfway Crooks is one of the hippest, most exciting new breweries in the country. It specializes in Old World styles, namely German lagers and Belgian-inspired ales, while dabbling in thoroughly modern American IPAs, too. Its flagship Radix proves pilsners can be some of the most complex and rewarding beers to drink, with a clean, zesty zip from Hallertau Blanc hops and an electric finish.

From Scandinavian- and Russian-inspired ales to Czech- and German-style lagers, New Hampshire’s Schilling plumbs the obscure depths of regional European brewing history to recreate modern stateside interpretations. Glimmen is a frothy, full-bodied lager with the faintest whiff of mesquite smoke on the nose and bready, robust flavors on the palate. It’s a beer crafted for the cold winter months, but it had me happily lounging poolside and dreaming of a tubing trip.

I found myself in Connecticut in late October, riding bikes amid the technicolor orange, red, and yellow trees and camping with some friends on a sprawling horse and hog farm. My friend Adam had muled some four packs of Allagash’s Foliage Report down from Maine and we cracked a few around the campfire late that evening. Rich, warming, and robust, it was the perfect beer for the season and the environs, with a toasty-sweet nose of toffee and caramel and a restorative, full body enriched with dark Belgian candi syrup.

Once a year-round staple before being downgraded to a seasonal release and eventually discontinued altogether, California’s Firestone Walker has mercifully pulled its famed Wookey Jack back from retirement, to the delight of Black IPA fans everywhere—albeit only temporarily. Spicy with rye and dank and citrusy with Amarillo and Citra hops, Wookey Jack gets its signature dark color from debittered black malts, lending plenty of toasty notes without acrid, burnt flavors. It’s the equivalent of sticking your nose in the undergrowth of an ancient pine forest and taking in a giant breath.

Stasis, a seemingly ho-hum altbier made next-level with its focus and precision, avoids the trap of many a forgettable collaboration—mere vanity projects or simply an excuse for brewers to hang out together—by harnessing the unique talents of each partner for a beer that’s unexpected and energetic. Brooklyn’s Threes is at its peak with a line of oak-conditioned low-alcohol lagers and ales, while Connecticut’s Fox Farm is the type of brewery that underpromises and overdelivers on nearly every beer it makes. Stasis knocks your socks off with ripe fig and fruity yeast flavors while staying dry with toasty-crisp finish. The oak rest rounds off any edges and harmonizes every sip.

Soft and juicy hazy IPAs are still all the rage, but truth be told, they are some of my least-favored styles to drink. A sip or two can bring pure joy, but drinking more than that often turns my stomach and has me reaching for a beer with good structure and linearity. One of the few breweries I trust with the style is Asheville’s Burial, which tends to layer flavors in a focused way so that the beers don’t come off as amorphous and monochromatic. Deception of Innocence marries sweet pineapple and blood orange notes atop a plush body of oats and wheat for a delightful yet powerful beer that ticks all the boxes I look for in a New England-style IPA.

On the opposite end of the hoppy spectrum from the hazies is Brasserie de la Senne’s Taras Boulba, an exceptionally bitter Belgian pale ale that I enjoyed years ago but ignored until I started revisiting it often in 2021. (The brewery’s old importer went out of business, but bottles are available via a new distributor.) Loaded with bright, aromatic hops, the beer is energetic with a fizzy carbonation and a lean body that makes it as drinkable—and repeatable—as any beer you’ll find.

Averie Swanson crafts beautiful and intriguing Belgian-style saisons at her brewery-in-residence, Keeping Together, based in Chicago. Her aim is to make beers that are “succinct and easy to be around,” which often translates to savory ales with real clarity and focus: beers of depth that invite thoughtful conversation and community. Undulant & Impermanent is a classic example. The base saison is re-fermented with maple-roasted carrots and steeped on second-use fernet botanicals from Chicago’s Rhine Hall Distillery for a textured beer with notes of cinnamon, saffron, and cocoa nibs. The interplay of the carrots and botanicals give it a captivating tension that walks a tightrope between acidity and sweetness.

New Jersey might not be the first place you’d think of when it comes to farmhouse-style beers brewed with local fruits, but the Garden State’s James Priest is a wizard with spontaneous fermentation. His Referend project is one of the more alluring modern breweries making ales without the use of pitched yeasts, relying instead on natural inoculation from the ambient air. The beers are often labor intensive, such as Pomes Penyeach, a spontaneous wheat ale re-fermented with pressed local apples and aged in charred oak spirits barrels. After six months, it’s spiked with wildflower honey and conditioned in the bottle until it’s completely dry for a precise, almost austere beer whose every lemony, acidic, and crisp note is in perfect balance and harmony.

Consistency isn’t Brasserie Fantôme’s strong suit. The one-man operation of Dany Prignon, an eccentric, whimsical brewer in his late 60s who’s been brewing for more than 30 years, operates out of a tiny brick-and-stone brewery-slash-taproom in the Wallonia region of Belgium. At times, his earthy, herbal saisons are phenomenal and ethereal; at others, they are downright undrinkable. And as with many wines, variation can occur from bottle to bottle. For Macaquincoing, Prignon uses cardamom, quince juice, and quinine (as in tonic water), to create an exquisite blend of funky pear, lemon, and rosemary flavors that meld seamlessly in a fluffy meringue of a beer. Just hope the bottles you get are as good as the ones I tasted.    Evil Twin NYC Great Northern Barrel Aged Series 20 and New Belgium Oakspire 2021.

New Belgium first released Oakspire three years ago, employing a proprietary infusion method to pull flavors from bourbon-steeped charred oak spirals into an already high-alcohol amber ale. For 2021, it collaborated with the ever popular Four Roses for a new iteration on the process, producing a pour that’s rich and warming without being boozy-hot, yet pleasantly spicy from rye in the base malt. The oak spiral infusion “aging” method might seem gimmicky, but the finished beer is stellar: Notes of toffee, caramel, and vanilla are balanced with flavors of dried, dark-red fruits and hints of coconut.

Behind all the contrivances and schtick at Evil Twin Brewing New York City—“pastry seltzers,” Mountain Dew- and Coca Cola-inspired sour ales, yogurt-infused breakfast beers—is a serious brewery making some of the best beer in New York. Its line of lagers and Belgian-inspired ales might not get as much attention on Instagram, but they are incredibly focused and nuanced with real depth of flavor. The Great Northern series highlights strong beers that have rested in oak for a considerable period of time. (The name references the brewery’s Ridgewood, Queens, barrel-aging room that features the actual Great Northern Lodge prop sign from the original Twin Peaks TV show.) For the 20th release, the brewery packaged an insanely delicious double barrel-aged imperial stout that first saw a year-long rest in Pedro Ximénez sherry barrels before being finished for 18 months in Taconic maple bourbon barrels. It’s as opulent and flashy as you might imagine, but maintains focus and structure without becoming overpowering.

After 40 years, Sierra Nevada’s famed fresh hop Christmas ale is finally available in handsome brick-red cans. While the beer is something of a cult favorite among brewers and industry insiders (you can even buy matching socks to go with your cans), it’s also available at nearly every grocery store, gas station, and CVS in the country for about $10 per six-pack. And while the wintry cabin-adorned label might suggest mulled spices and dried fruit, freshly picked Cascade and Centennial hops from the Pacific Northwest bring a bracing piney, earthy flavor to the IPA bite.

Perhaps the biggest story of 2021 was craft’s reckoning with its most serious #MeToo moment to date. In May, Brienne Allan, a brewer at Notch in Massachusetts, fielded two sexist remarks in a single day. Exasperated, she posed a question on her Instagram stories asking, “What sexist comments have you experienced?” It unleashed a tempest of detailed, savage response with widespread fallout, including firings and developments that continue in nearly every aspect of the industry.

Allan’s Brave Noise beer aims to keep the conversation alive and to continue to force real change by bringing further awareness to the issues women, BIPOC, and LGBTQ individuals face daily in the craft beer industry; it uses the open-source recipe model that became a hallmark of beer activism in 2020. The base recipe is a straightforward, modern, wheated pale ale brewed with Sabro and Mosaic hops, which more than 175 breweries from around the country and world—including Oregon’s Breakside, Chicago’s Half Acre, and Austin’s Jester King—then tweaked to create their own takes. The initiative encourages homebrewers, bar owners, and everyday beer drinkers to do their part to create inclusive and safe environments for staff and customers by participating in bystander training and by forming and posting codes of conduct for their establishments and homebrew clubs.